Head coach Mark Cornwell has been impressed by a number of players who were part of last season’s BUCS Super Rugby squad, including Luke Stratford who scored the winning try in the BUCS Rugby Union Championship final at Twickenham in April.

It has secured them a place among a raft of new signings at Hartpury RFC, based at the Sports Academy on Hartpury College and University Centre’s 360-hectare campus.

A significant number of Hartpury RFC players have gone on to play for Gloucester Rugby, including Jonny May, Billy Burns and Dan Robson, as well as other Premiership clubs.

“There are a number of players who have come from outside with good experience,” said Cornwell, ahead of tomorrow’s first match of the season at home to Yorkshire Carnegie (kick-off 7.45pm).

“Also, it’s fantastic to see guys coming through from our BUCS Super Rugby programme who have, frankly, played so well that they have earned the chance to step up from student rugby into the Championship squad.”

Cornwell’s side have had two pre-season fixtures, away at both Worcester Warriors and National One side Cinderford, as well as a conditioned session with the Bristol Bears and training run-outs with Gloucester Rugby.

“The lads have worked incredibly hard – and I know that all coaches are going to say that – but this season was unusual because a lot of it took place in a heatwave,” he said.

“The boys are now absolutely ready to get out there on Friday and to put into practice everything we’ve been working on for the past several weeks.

“Worcester was very tough for us, as we knew that it would be, but we took a lot of things to work on out of that game which have been extremely valuable for us in the last couple of weeks.  The boys have reacted incredibly well to the experience.

“It’s difficult to get continuity in these games because you want to look at a wide group of players and there are always people running on and off.

“However, from our point of view there were a lot of positives out of the Cinderford game.

“I was disappointed with a couple of things in the first period (of three) but, as we got things going, we scored a couple of tries out wide and also managed to get the driving lineout working well.

“It’s always a ‘work in progress’ at any club, but we’re happy with where we are at the moment.

“We’ve picked up a couple of bumps in pre-season, both in the games and in training, which is not ideal, but we play a physical game and so we’ve just got to get on with it.”

In terms of squad health, influential centre Steve Leonard is targeting the second match of the season, away to Doncaster Knights, as a possible return date from a hamstring niggle.

Another three-quarter, Nick Carpenter, has rolled an ankle and will be unavailable for up to four weeks, while up-and-coming flanker Max Clementson has sustained a broken metatarsal that could put him out for two months.

Full-back Mike Wilcox sustained a shoulder injury in the Cinderford game and has been undergoing checks this week.

Looking ahead to the match against Yorkshire Carnegie, Cornwell said: “I’m expecting a big pack to be trying to lay a platform for them to play off.

“They have got some good attacking backs and they are resilient and strong defensively.

“We had two very close games against them last season, with a draw here and a narrow defeat away from home in a match that we felt we should have got more from.

“Yorkshire Carnegie have been around at this level, and above, for a very long time.  They’ve got a great tradition and a good history, so we obviously respect them, but we’ll be ready for them on Friday night.”

All money raised from a collection and the sale of programmes at tomorrow’s match will be donated to the fund set up in support of Hartpury player Rhys Oakley, who has metastatic testicular cancer, and the It’s in The Bag charity.

It follows a sponsored head shave by Hartpury players on Monday that has raised more than £7,000.

If you’d like to support the fundraising efforts, visit www.justgiving.com/crowdfunding/hartpuryheadshave

Picture: The Hartpury team celebrating their victory at Twickenham 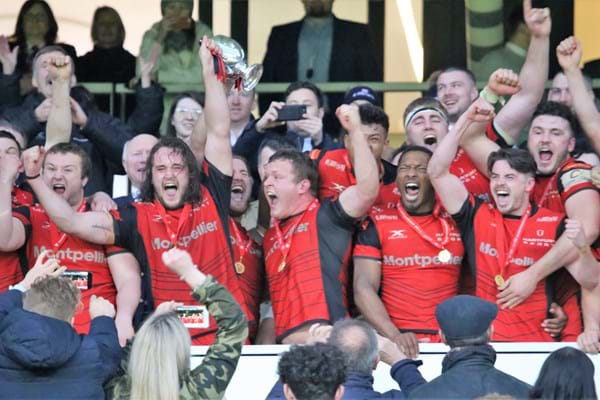