At the end of a thrilling day of cross-country at the NAF Five Star Hartpury International Horse Trials, Britain’s Tina Cook and Billy The Red reigned supreme in the NAF Magic CIC3*.

Sitting in fifth place overnight after the dressage, Tina and Billy The Red pulled off a beautiful clear round showjumping before heading out on Eric Winter’s 3* course.

The pair then performed a cross-country masterclass to finish on their dressage score of 25.6 and pull four places up the leaderboard into first position.

Tina said: “The season has been unfortunate for me as I started with great hopes after being fourth at the Europeans last year and Billy The Red is only an 11-year-old, so he’s a young horse.

“Then we had our fall at Burnham Market where I dislocated and fractured my shoulder badly, so that caused me to miss a core of the season.

“Everything fell into place here, he nailed a good test because he is a world-class horse and I’m thrilled — it’s been a while since I’ve had a big win and it was a strong field.

“The ground was fantastic, as was the course, and it was a great prep for the autumn events.”

A clear showjumping and cross-country round with just 0.4 time penalties brought Piggy French and Quarryquest Echo up from sixth place overnight to second place.

Sam Ecroyd and Wodan II made a huge leap from 11th overnight to third when pulling off a clear showjumping and cross-country round with just 0.8 time penalties to finish on 28.3.

Ireland’s Aoife Clark was in the lead ahead of Ryuzo after the dressage but retired on the cross-country, leaving Ryuzo in pole position after his clear cross-country.

His clear showjumping cemented his win, finishing on 29.4.

“We are still a new partnership so at each competition we are still learning about each other, but he is a brilliant showjumper and did a great round,” said Ryuzo.

“He’s a fast horse across country. There was a lot of pressure because I was in the lead overnight and there was a long wait from the trot up this morning to showjumping this afternoon.

“We came here for qualification so to win was a massive bonus.”

Emily Philp and Fallulah held on to their runner-up spot after a super clear round to finish on 31, while Alice Pearson and Jack The Ginger rose from fifth to third after showjumping clear, finishing on 34.4.

Their clear round showjumping and foot-perfect cross-country kept them on their dressage score of 27.1, only 0.5 points ahead of runner up Susie Berry and Fernhill G.

Susie’s double clear also kept her on her dressage score of 27.6, as did third-placed Vicky Tuffs and Heartbeat’s who finished on 27.8.

Competition was tight, with the top 10 all jumping double clears to finish on their dressage scores. Of the 84 starters, 35 jumped double clear.

“She really deserves it, she’s such a special horse and I think she is a real horse for the future,” said Dani of Ann Butler’s six-year-old mare.

“She comes out and delivers every time. She does everything with no fuss and no drama and just focuses on her job which makes my life very easy.

“The event has been great for these young horses experiencing their first long-format event.

“The courses were great course, the ground was perfect, and the whole atmosphere was brilliant. Thanks to NAF and the team at Hartpury for putting on such a great event.”

“We cannot thank the officials, Hartpury staff and volunteers enough. Without them and our sponsors NAF, putting on a event of this calibre would not be possible.”

Day one of the NAF Five Star Hartpury International Horse Trials showcased the stars of the future in the Dubarry Burghley Young Event Horse qualifier.

Harry Horgan and Sara Brown’s Sirius were clear winners of the four-year-old class, winning by a 10-point margin from runners up Ginnie Turnbull and Geoffrey Burton’s A Bootlegger Black who scored 78, followed by third-placed Emily Young Jamieson and Sarah Cowley’s Joanna N.O who scored 77.

All three have now qualified for the final, which takes place at Burghley Horse Trials in September.

Harry said: “Sirius has already qualified for the BYEH finals, but we wanted to bring him here to experience the atmosphere and develop his education.

“I’m delighted and love producing the four and five-year-olds.”

The five-year-old qualifier got under way in the afternoon and was won by last-to-go Austin O’Connor and the beautiful chestnut stallion Silver Don, owned by Tina Figenschall.

A fluent dressage test earned them 27, while their clear showjumping round scored 37.

For his conformation, Silver Don earned 11 and 8 for his type, finishing on a total score of 92, nine points clear of second-placed Bernie Wharfe and Stonehavens Penhills Cobra (83 points).

Third place was awarded to Kitty King and Hazelbergs Faraono, who scored 81.

“We broke him as a four-year-old and did these young horses classes last year and then gave him plenty of time to mature,” said Austin of the Silvio I x Donna Rosa stallion.

“He’s unbelievably well behaved and has so much ability. He’s a very exciting prospect for the future as both a stallion and event horse.” 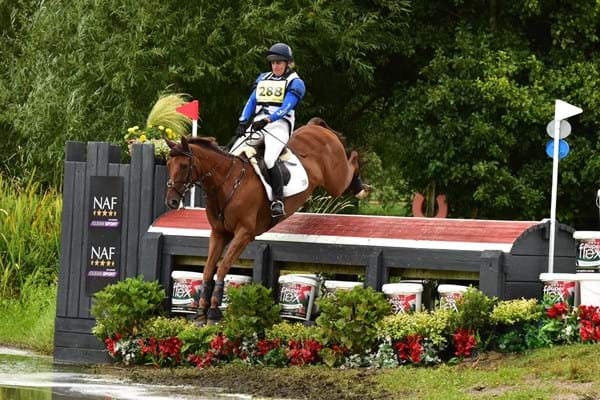