Gloucester-Hartpury head coach Susie Appleby has reflected on a whirlwind 12 months, ahead of the start of the 2018-19 Tyrrells Premier 15s women’s rugby campaign.

She worked wonders in 2017-18 as her rapidly-assembled squad established itself in the newly-formed league before starting to thrive and eventually qualify for the end-of-season play-offs.

They head into tomorrow's first league fixture of the season against Harlequins Women (kick-off 2pm) at Hartpury College and University Centre Hartpury buoyed by their progress over the past year.

“It’s been amazing really, what a journey over the past 12 months, not just ourselves but for the whole league,” said Appleby, also the Women’s Rugby Senior Manager at Hartpury.

“Last year, we’d thrown together some players and didn’t really know what to expect, but we just got on with it really and grew into it.

“We’re not in perfect shape, but we’re probably a step ahead of where we were 12 months ago.

“There’s going to be a lot of excitement for the young players in particular, we’ve got about six 17-year-olds getting their dispensation and about to step in.

“We have suffered some long-term injuries, but that means opportunities for someone else.

“This league is ever-evolving, we’re trying to prepare players for international rugby, that’s our goal.

“Hopefully we’re doing that to the best of our ability and this league will then show how far we’ve come.”

The media presence at Twickenham for the launch of the upcoming season was significantly bigger than in 2018, and Appleby feels it reflects the development of the league.

“Last year there were a few live streamed games and the final was shown live on TV, but already there are plans for a couple of games to be televised live and I know we’re hoping to play some double-header games with Hartpury RFC and Gloucester Rugby,” she said.

“That sort of profile grows the game massively. The new pitch at Kingsholm will benefit the men, but also hopefully allow us to play there more which is amazing.

“Every club evolves and it’s just been making sure that we keep up with that.

“All the clubs in this league have upped their game – better coaching, better strength and conditioning, new players being identified and getting a chance to showcase what they can do.”

One key difference for Gloucester-Hartpury this year compared with their preparations last term is the recent pre-season training camp in France, following victories over Ospreys and Bristol Bears Women.

“All rugby players know that the first competitive outing can be brutal,” she said.

“So, we hope that the tour will help us to be a little more battle-hardened – that’s the first thing.

“But we have a large player base, many are students and weren’t available for the first two games.

“We’ve got 10 to 15 new players so it’s important that they feel comfortable in the side and get a feel for how we play.” 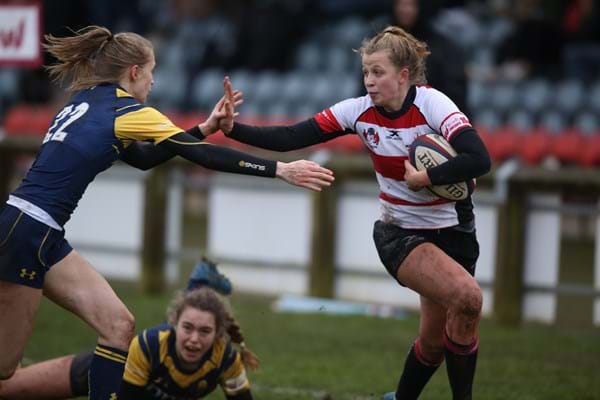