Zoe Aldcroft has seized the opportunity to combine her academic studies at Hartpury University with playing rugby for England and Gloucester-Hartpury Women’s RFC.

Zoe, who is studying BSc (Hons) Sport and Exercise Science, is among three current Hartpury students, along with Kelly Smith and Connie Powell, to have been named in the England Women training squad for a four-day camp that starts today.

Zoe is enjoying the flexibility and support provided by staff at Hartpury aimed at helping her fulfil her potential on and off the pitch.

She had previously spent two years at Hartpury College studying a Level 3 Extended Diploma Sport (Performance and Excellence) Rugby, after which she left to study at a university in the North East.

She was delighted to return south to study and play at Hartpury following a phone call to Women’s Rugby Senior manager Susie Appleby, also the Gloucester-Hartpury head coach.

“It wasn’t easy up there for me to combine my academic work with my rugby, so I picked up the phone to Susie to see if we could work something out,” said Zoe.

“When I got down here, it all fell into place. There was flexibility around things like doing exams and playing rugby, and it just felt right committing to play for Gloucester-Hartpury.

“I knew I was going to love playing for the team and it’s working out that way.

“Because there hadn’t been a first division team here in the past, a number of us went off to play for other clubs, but then Gloucester-Hartpury were accepted into the Tyrrells Premier 15s and a lot of us wanted to come back and play our part.”

Zoe signed for Gloucester-Hartpury last year, but she missed the whole of the campaign with an ankle injury.

She had been a member of the England 2017 Rugby World Cup squad, and admits that it was tough to go from the biggest tournament in the world to the injury list.

“It wasn’t a great time, to be honest,” explained Zoe. “Everything was all set, even before the World Cup, for me to come to Gloucester-Hartpury and I was so excited to be starting with a new team as the Tyrrells Premier 15s got under way.

“Then the injury happened, and I spent all last year rehabbing and I wasn’t able to really get involved with the girls.

“I absolutely hated spectating and couldn’t really bring myself to watch the games as I got so frustrated, but this year is so much different and how I wanted it to be.” 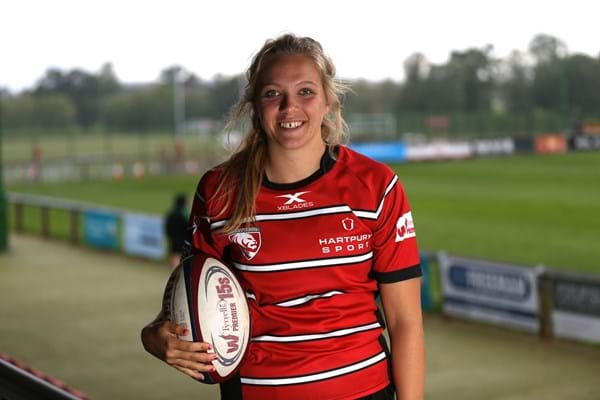