Storage King has been announced as the inaugural principle partner of Gloucester-Hartpury Women – a partnership between Gloucester Rugby and Hartpury University and Hartpury College.

The club provides Hartpury students with an opportunity to play rugby in the elite women’s rugby competition in England, the Tyrrells Premier 15s.

Susie, who is Head Coach of Gloucester-Hartpury, in addition to her role at Hartpury, said: “We’re absolutely delighted that a company like Storage King, who are already involved with Gloucester Rugby, have decided to increase their support of rugby union by agreeing to become our principle partner.

“It’s such a boost to me and the squad to know that companies are acknowledging the progress we’ve made and want to be a part of it.

Gloucester-Hartpury, which plays its home matches at Hartpury, has made good progress since being launched in the summer of 2015, when former England international Susie had only a handful of players to work with.

The club, which plays its home games at Hartpury, was named as one of the 10 teams to compete in the inaugural Tyrrells Premier 15s campaign in 2017-18, in which it reached the end-of-season play-offs.

Robin Greenwood, CEO of Storage King, said: “Storage King fully supports women’s rugby, and we have been impressed by the performance that the Gloucester-Hartpury team has shown over recent years.

“We believe that as the sponsorship will offer much admin and financial support, Gloucester-Hartpury can focus on growing not only their own club, but women’s rugby in general.

“Fans and their families will also benefit from the sponsorship, through fun and engaging activations that we will be hosting on match days.

“We look forward to growing this relationship, and are very excited about the way forward.” 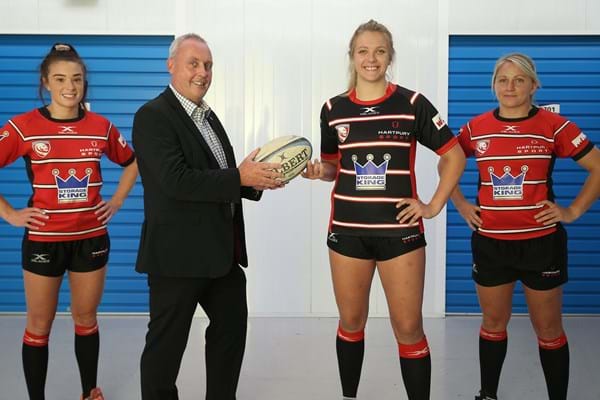