Hartpury students are celebrating another magnificent triumph after winning rugby’s AASE League final for the ninth time in the past 10 years.

The Under-18s men’s team produced a match-winning combination of skill and determination to beat Beechen Cliff, who had won every one of their previous matches this season, at Premiership club Saracens’ ground Allianz Park.

Wayne Thompson, Junior Rugby Academy Manager at Hartpury, said: “The great thing about this side is that they really motivate themselves, they aspire to go play at the highest level and they also don’t want to let down the teams that have come before them.

“I couldn’t be more proud of their performance against Beechen Cliff, who had won their last nine matches easily and probably started the match as favourites.

“We weren’t fazed even when Beechen Cliff opened up an early 10-0 lead, which reflects really strongly on our players’ strength of character as well as their undoubted talent.”

Hartpury’s latest rugby success adds to a long list of achievements, including victory for its university side in the BUCS Championship final at Twickenham in May.

The rugby pathway in place at Hartpury means students can play for Hartpury College and then Hartpury University – based on the same 360-hectare campus – and its Championship side Hartpury RFC.

In the past decade more than 150 Hartpury graduates have gained international honours, including England wing Jonny May and Italy forward Sebastian Negri.

Students at Hartpury, training base of Premiership club Gloucester Rugby, have access to a range of world class-facilities.

Hartpury’s new £8.8 million Sports Academy includes a biomechanics laboratory featuring the only high-resolution digital mirrors in the UK, a rehabilitation suite featuring an anti-gravity treadmill, and a human performance laboratory with an altitude chamber, and a sports hall. 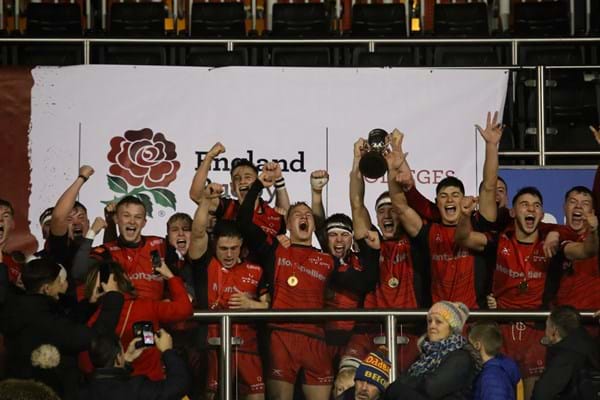