International rugby player and Hartpury University student Kelly Smith is committed to tackling more hard work on and off the pitch after a highly memorable year.

Kelly, who is studying for a BSc (Hons) degree in Physical Education and School Sport, fulfilled a lifelong ambition when she was called up by England for the Six Nations tournament in the spring.

Following her breakthrough campaign with England, she has raced to the top of the try-scoring charts for Gloucester-Hartpury Women’s RFC in the Tyrrell’s Premier 15s, scoring another four tries in the 27-7 win over Worcester Valkyries last Saturday.

“Pulling on the England shirt for the first time was absolutely amazing – a real dream come true,” reflected Kelly.

“Before the game I remember sitting in the changing room alongside the likes of Danielle Waterman and Rocky Clark, who have more than 100 caps between them.

“In fact, Danielle used to coach me at Hartpury when she was the Junior Women’s Rugby Academy Manager – she’s the one would have me up at 7am for training sessions in the freezing cold.

“But without those hard sessions I don’t think that I’d be playing at the level that I am now.

“It would be easy to say ‘this isn’t for me’ when times get tough – that’s the make-or-break time – but you just have to show the mental strength and resilience to keep pushing on.

“After the Six Nations, in which I played against Ireland and Scotland, I was delighted to be selected for all three games of the Autumn internationals against Ireland, Canada and the United States.

“That was awesome, especially playing against Ireland at Twickenham after the men’s game against Australia and warming up in front of 80,000 people.”

Kelly studied a Level 3 Extended Diploma (Performance and Excellence) Rugby at Hartpury College before embarking on the degree course at Hartpury University on the same 360-hectare campus.

With Hartpury tailoring academic and training timetables to suit student athletes, Kelly didn’t have to think twice about extending her stay at Hartpury to maximise her chances of achieving academic and sporting success.

“It was a really easy decision,” she said. “Hartpury has the sports facilities – they’re amazing – and the support network that enables me to continue with elite level sport and the training demands that go with it, alongside the time I need to dedicate to study.

“They know what my commitments are with rugby and they couldn’t be more supportive and accommodating.

“The course is really good because we’re learning the theory as well as practical skills and developing an understanding of children right through from primary to secondary school.

“I would like to go into teaching at some point, depending upon what goes on with rugby, and have that to look forward to when the time comes.”

Kelly enters the second half of the Premier 15s campaign with Gloucester-Hartpury looking to build upon the progress she and the team made in the opening months of the season.

Susie Appleby’s hard-working side are well placed behind the league pacesetters with all still to play for in the race for an end-of-season play-off spot.

“We have developed as a team and we’re looking sharp,” said Kelly. “Everyone is willing to work hard and put in the hard yards, which is exactly what you need in a squad, and things look really positive going forward.

“Susie is a very good coach and loves to win. She will do anything in her power to make us go out and perform, from extra training sessions to game analysis, to supporting us individually and as a team.

“For me, it is a big confidence boost to be top try scorer because that’s what I’m looking to do every game – score tries – but I’m only in a position to do that because of the good work that goes on around me by my team-mates.” 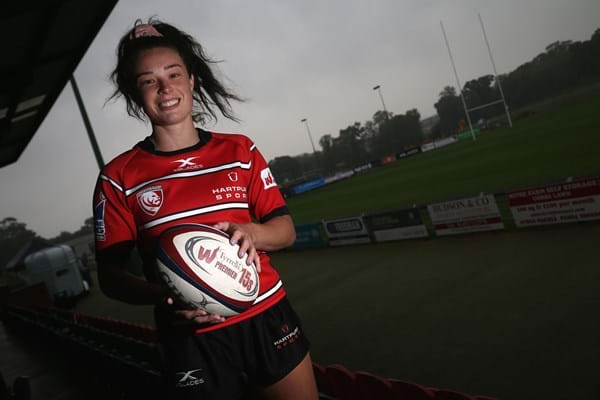