Hartpury University’s resident hedgehog expert Lucy Bearman-Brown is helping to train a special ‘detection dog’ to sniff out hedgehogs so they can be moved out of harm’s way in land development projects.

Lucy, who has appeared on national TV and radio, has teamed up with the People’s Trust for Endangered Species and the British Hedgehog Preservation Society to work with a springer spaniel called Henry, one of a group of conservation dogs from Conservation K9 Consultancy.

By training dogs like Henry, whose sense of smell is 100,000 times more sensitive than a human’s, it’s hoped nesting hedgehogs can be found and moved to safety before their habitat is cleared for development.

As hedgehogs spend 85% of their life in their nest in dense undergrowth and long grass they are in danger whenever land is cleared or long grass is mown.

Working alongside Henry’s trainer Louise Wilson, Lucy starts by finding hedgehogs herself the traditional way with spotlights and marks them with a small radio-tracking device.

Henry then searches the area, and Lucy can see how effective he is at finding the hedgehogs in a range of different habitats, during the day and night.

Lucy then searches the area again herself, this time using thermal cameras, to see if modern technology can help with detection rates.

By carrying out these surveys during summer months, when hedgehogs are active, and winter, when they are hibernating, will test the methods to the extreme, showing just how much of a super-dog Henry is!

“As we suspected, Henry’s already been finding hedgehogs that I couldn’t locate using traditional methods – he is incredible! He is particularly good at finding hedgehogs hiding in thick undergrowth, much to the bemusement of Louise as she follows behind on the end of Henry’s lead.

“Henry is trained to locate hedgehogs without stressing or hurting them. When he finds one he lets Louise know by quietly sitting nearby and looking at her. He then gets his reward, a game of fetch with his ball, away from the hedgehog.

“These early findings suggest we may soon have a new method that is more effective for finding hedgehogs at risk from land development, so we can move them out of harm’s way.

“The plan is that once this concept is proven, more dogs can be trained to help find hidden hedgehogs.

“I would like to thank the PTES and BHPS for funding the project and Conservation K9 Consultancy and Louise for letting me work so closely with Henry.

“Henry’s handler Louise has already trained dogs for other wildlife conservation purposes. They have helped track down bat carcasses at wind turbine sites, located elusive pine martins and sought out cheetah scat, so finding hedgehogs is a great addition to their skill set.”

Lucy’s study is among a number taking place within the Animal Welfare Arena at Hartpury. 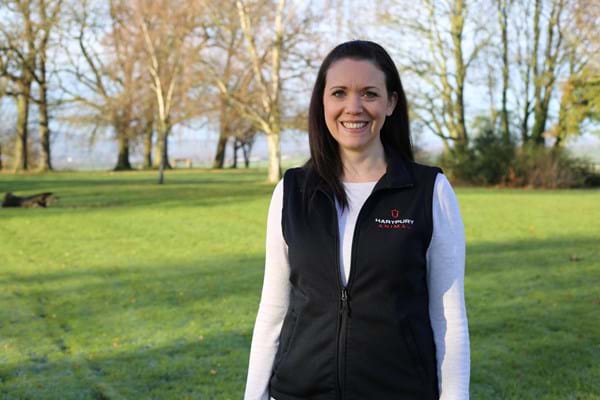