Hartpury University graduate Will Biggs has launched an easy-to-use phone app MatchDayInfo that brings sports fans closer to the action and helps professional sports clubs connect with an international audience.

Now enrolled on Hartpury’s Masters in Research degree, Will had a brainwave about creating the MatchDayInfo app while studying for a BA (Hons) Sports Business Management degree at the specialist educational institution.

MatchDayInfo subscribers can download match day programmes to read, no matter where they are in the world, allowing sports clubs to connect with their supporters even if they’re unable to attend the match.

Will said: “The original idea for MatchDayInfo came during my second year on the Sports Business Management degree at Hartpury University.

“After my dad and I had attended a rugby match at Twickenham, I thought ‘Wouldn’t it be great to have a match day programme on your smart phone wherever you go? You don’t have to be at the game’.

“As well as bringing supporters closer to the action, clubs are recognising that it’s a fantastic promotional tool to help generate match day interest.

“At the moment we have eight clubs signed up and, following discussions with a number of interested parties, hopefully next season we’ll be closer to 50.

“We’re pleased with the progress we’ve made so far, but we’re determined to keep driving the business forward and continually improving the service for our subscribers and the clubs who’ve come on board.”

As part of his Masters in Research degree, which is ideal for anyone wanting to undertake a research-focused qualification, Will meets with supporters and management at sports clubs to gain feedback on how the app could be further enhanced.

“Developing the app has tied in really well with the BA (Hons) Sports Business Management degree and the Masters in Research,” said Will, who also studied a Level 3 Extended Diploma Sport (Performance and Excellence) Rugby at Hartpury College.

“On both courses, my tutors have helped me to successfully apply the knowledge that I’ve gained at Hartpury, such as about consumer behaviour, accounting and how to create an audience, to the real business world.

“Running a business is time consuming and hard work, but I’m enjoying every minute of it thanks to the support and encouragement I’m receiving from my tutors at Hartpury and from family and friends.”

Picture: Will Biggs at Hartpury 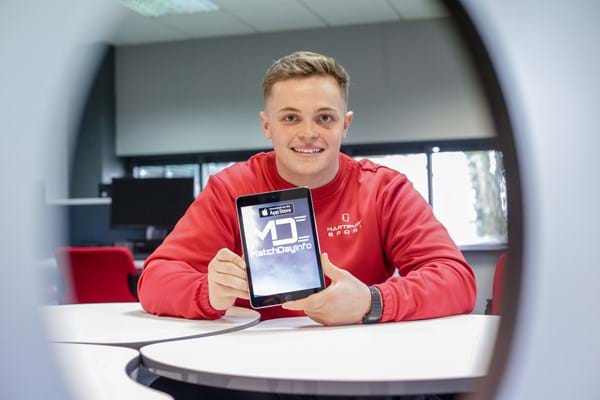