Hartpury College footballers have been crowned national champions, winning the same prestigious competition for the fourth time in five years.

Goals from King Baidoo, Josiah Dustan, Romeo Fabrice Yao, Owen Windsor and Theo Maye secured a 5-0 victory over Balby Carr Academy in the final of the ESFA Under-18 Elite Schools’ and Colleges’ Cup.

Paul Tassell, the manager of the Football Academy at Hartpury College, where students can take a range of A-levels and diplomas, said the players had executed the gameplan perfectly.

“I think we controlled the majority of the game,” he said. “We’d done our homework on Balby Carr and we knew what to expect – they’re direct and physical opponents – and we dealt with their threats very well.

“To score five goals and not concede, especially in a cup final, is a real credit to the players.

“The lads all did their jobs, we played some great football at times and were good to watch – I’m extremely proud of them.”

Paul said Hartpury College’s outstanding success in the ESFA Under-18 Elite Schools’ and Colleges’ Cup over the past five years was testament to the professionalism of the staff and students involved with the Football Academy.

Paul said: “As it’s a knockout cup competition, this means you only need to have one bad game and you’re out, so for our teams to consistently turn it on when it matters underlines the quality and consistency of the conveyor belt of players coming through the system at Hartpury.

“The students coming into the Football Academy don’t want to be team that fails, which creates an environment in which there’s a strong will to succeed and continue the legacy.

“The staff are committed to ensuring that there’s an excellent culture, it is a positive environment and the students can trust each other and the staff in what we’re looking to achieve.

“We make sure they’re treated as people first and foremost and that they’re on top of their education – we’re flexible with timetabling so our students can fulfil their potential academically and in sport.

“There’s a competitive environment, naturally, that brings about further development in the students and they’re constantly challenged, which is another important factor.”

Hartpury University, four-time winners of the BUCS National Championship final, just fell short of winning the title for a fifth time, beaten 1-0 after extra time by the University of South Wales.

Picture: Hartpury College students and staff celebrating their victory in the ESFA Under-18 Elite Schools’ and Colleges’ Cup final at Ewood Park 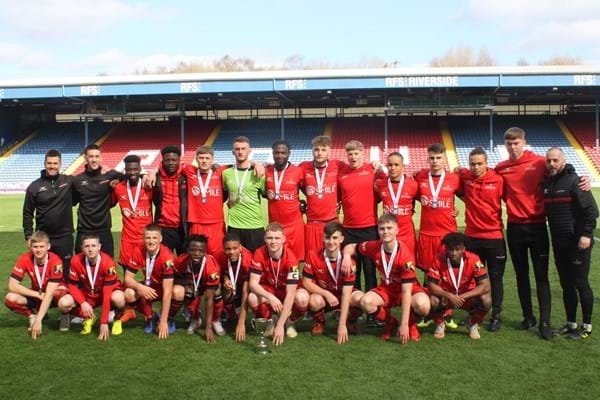