Students from Hartpury have powered to gold medals in two showpiece rowing competitions, underlining the strength of its unique talent programme.

Following a rewarding training camp in Belgium, the students achieved notable successes at the Ghent International Spring Regatta in Belgium and the Junior Sculling Regatta at Dorney Lake in Buckinghamshire.

The winners included James Mackman and Fergus Woolnough, who are both part of the Hartpury Rowing ‘Start’ programme, a unique joint initiative between Hartpury, the GB Rowing Team ‘Start’ Programme and Gloucester Rowing Club, aimed at identifying and developing the next generation of Olympic rowers.

Ben Jackson, Lead Coach of the Gloucester Hartpury Rowing Programme, said: “The regatta in Ghent was a great way to finish off an excellent training camp in Hazewinkle.

“The rowers all made lots of progress that they were then able to put into practice. It was our first regatta of the season so hopefully we’ll be able to find extra speed over the next few months.”

There were more golds for the team at the Junior Sculling Regatta, with Rhiannon Morgan and Charlotte Enright winning again in the Women’s Under-18 double sculls.

Some members of the rowing team are studying A-levels and diplomas at Hartpury College, while others are enrolled on undergraduate degree courses at Hartpury University. 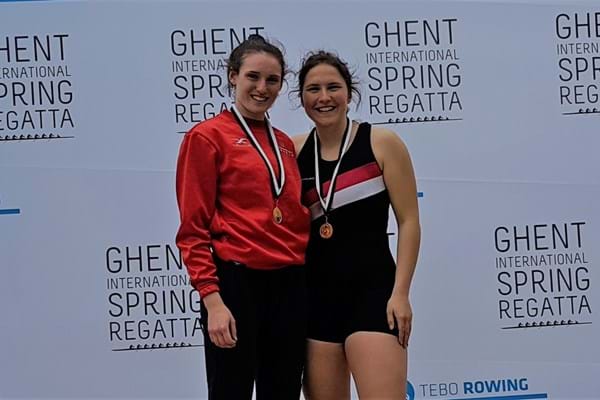