Two sisters who came through the rowing programme at Hartpury have competed in the same Great Britain boat for the first time at the European Rowing Championships.

Mathilda and Charlotte Hodgkins-Byrne, who both studied A-levels at Hartpury College, were named in the GB women’s quadruple sculls alongside Jess Leyden and Melissa Wilson for the competition in Lucerne, Switzerland.

Underlining the strength of the rowing programme at Hartpury, Mathilda and Charlotte helped power the boat into fifth place in the final, won by Germany, who also finished top of the overall medals table.

Ben Jackson, Lead Coach of the Gloucester Hartpury Rowing Programme, said: “Mathilda and Charlotte were among the very first students to enrol on the programme and we’ve enjoyed following their careers as they progressed through the Under-23 and senior international ranks.

“It’s extremely rare for two siblings to be in the same international team in any sport, so it’s absolutely fantastic that they’ve been able to compete in the same boat for Great Britain at the European Championships – it’s a fabulous achievement.

“They’ve worked really hard for their success and I’m sure they will continue to provide great inspiration for all the students coming through the programme.”

Current students enrolled on the rowing programme gained further success at the National Schools Regatta – the biggest regatta in the country for juniors – and the Monmouth Regatta.

A-level student Rhiannon Morgan and Charlotte Enright, who is studying a Level 3 Extended Diploma in Sport (Fitness) won the girls’ double at the National Schools Regatta.

The pair then teamed up with Ruth Mcateer and Karrie Spencer, both also studying A-level courses, to achieve a dramatic fourth in the final of the quadruple scull having led before losing a blade in the last 200m.

Picture: Sisters Charlotte (left) and Mathilda Hodgkins-Byrne (one from left) with team-mates Jess Leyden and Melissa Wilson (courtesy of Werow) 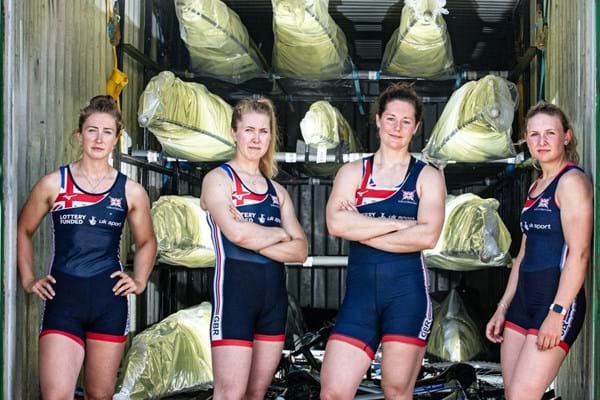