John Barnes, the Director of Rugby at Hartpury University and Hartpury College, has acclaimed its seven students who have been signed for the Gloucester Rugby Senior Academy for 2019-20.

A number of players in the Gloucester Rugby Senior Academy squad have featured at first-team level in recent seasons, both domestically and in Europe, and moved up to the first-team squad.

Hartpury students who have gone to play in the first team for Gloucester Rugby, whose training centre is based on Hartpury’s state-of-the-art 360-hectare campus, include England wing Jonny May and Wales forward Ross Moriarty.

John Barnes said: “We’re tremendously proud of the seven students who have been signed for the Gloucester Rugby Senior Academy for 2019-20 – it’s a great achievement.

“To be signed by one of the most successful rugby clubs in the country is a real credit to the dedication and commitment they’ve shown at Hartpury College while at the same time pursuing their ambitions of becoming professional rugby players.

“We were thrilled last season when Louis Rees-Zammit became the youngest player to represent Gloucester Rugby in a Premiership fixture, underlining the opportunities available to young players at Kingsholm if they show the right attitude and application.”

As well as its links to Gloucester Rugby, the rugby pathway at Hartpury means students can play for Hartpury College and then Hartpury University and its Championship club Hartpury RFC.

In December, Hartpury College won the AASE League final for the ninth time in 10 years, while Hartpury University won the BUCS Championship final for the third successive year at Twickenham in May.

Hartpury tailors academic and training timetables to suit student athletes and gives them access to a range of world class-facilities on campus.

Hartpury’s new £8.8 million Sports Academy includes a biomechanics laboratory, a rehabilitation suite featuring an anti-gravity treadmill, and a human performance laboratory with an altitude chamber, and a sports hall.

Picture: John Barnes, the Director of Rugby at Hartpury 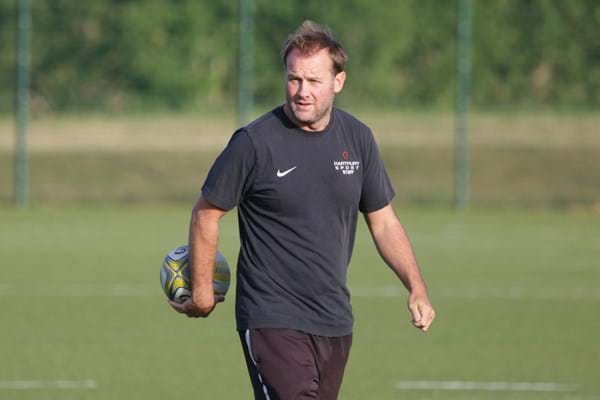