The Surrey-based rider posted the only double clear riding from a strong 33-runner field in the 1.50m Area Trial on the third day of the four-day attraction.

Following numerous four-fault rounds from many, the imposing chestnut jumped faultlessly in the first round with William opting for a steadier clear in the jump-off.

Joseph Fernyhough and Calcourt Quicktime lived up to their name with a quick jump-off time of 50.60 seconds, almost matched by Benjamin Bick and Galerius who put in a number of impressive turns to stop the clock in 50.92 seconds.

Both four-fault rounds finished in second and third respectively.

Lauren Edwards and Ella Sandra G followed up a good performance at Keysoe Equestrian Centre with a fourth placing, finishing on four faults in a time of 53.97 seconds.

Last year’s winner Greg Hill and Big Ben VI had an unfortunate rail down in the first round, preventing them from being able to offer up a repeat performance.

Lizzel Winter, who heads up Hartpury’s Equine Academy, jumped in her first Area Trial on board Fernhill Quality Street.

Also on the third day, Helen Rees and Bart IV picked up a superb victory in the National 1.30m Open with a double clear and a time of 29.44 seconds.

Hartpury Equine Academy’s Abbie Summers continued a run of flying form with a third placing aboard Quantas II in a jump-off time of 32.94 seconds.

Stephen Morgan Jenkins and Vivamunde Z finished in second place with a jump-off time of 31.71 seconds.

Mark Edwards enjoyed a one-two in the Nupafeed Supplements Senior Discovery First Round with a win onboard Montreuxs Tinker.

Adam rounded off a successful week with a rapid 34.86-second jump-off that left Marcella Marie Johnstone and Killea Storm in second place (37.47 seconds).

Speaking after his round, Adam said “The Hartpury Showjumping Spectacular is a great show and we love coming here. We are delighted with the performance of Blue Shaker and can’t wait to see how the rest of the season progresses”.

“We are thrilled with this win and are excited about the horse’s future. We love making the journey down to Hartpury each summer as they always put on a good show” he said.

Speaking of the show’s success, Equine Director Philip Cheetham said “The extra day has allowed us to add a greater variety of classes across the board.

“The addition of a Discovery Second Round was very well received by competitors and we’ve enjoyed stellar performances from top international competitors like Will Funnell.

“Closer to home, it’s exciting to see such striking performances from Hartpury’s Equine Academy students against such stiff competition.” 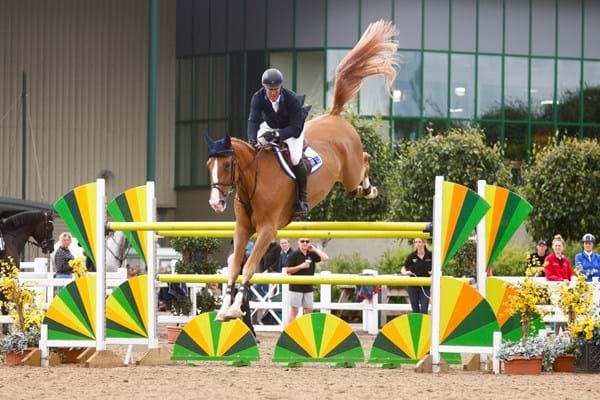