Former Olympic equestrian rider Jonty Evans is looking forward to the challenge of the Great North Run after stepping up his training with specialist health and fitness support from Hartpury’s team of sports scientists.

Jonty, who sustained a serious head injury in a riding fall last year, said having access to the world-class resources and expertise at Hartpury had improved his chances of finishing the 13.1-mile event on Sunday 8 September in his target time of two and a half hours.

Jonty was in a coma for six weeks after suffering the fall during the cross-country phase of a competition in Ireland.

Jonty said: “A few weeks ago, I ran my first 10k since the accident in one hour, five minutes.

“Not long ago, if you’d told me I could do that again I would not have believed you.

“Since the accident I have been working with Liz Launder, osteopath at the Margaret Giffen Centre for Rider Performance at Hartpury, but more recently the support has incorporated specific sports science support to work on my fitness.

“Since Hartpury started helping me, my training has moved into another league – everyone there has been so supportive.

“The facilities, such as the anti-gravity treadmill in the Sports Academy, are on another level compared with the equipment I’ve used in the past as a rider.

“In terms of diet and nutrition, eating and drinking the right things were always important aspects of my preparation and training that I looked at when I was working towards the Olympics.

“But at Hartpury the advice I’m receiving about what and when to eat and drink, is off the planet. The attention to detail is unreal.

“It’s making a massive difference to me in terms of my performance.”

Jonty has signed up for the Great North Run with Associate Professor Kathryn Nankervis – manager of the Margaret Giffen Centre for Rider Performance at Hartpury – and long-time friend Mike Knight.

The trio are raising funds for three charities close to their hearts – the David Foster Injured Riders Fund, Headway and Alzheimer’s Research UK.

Jonty added: “I was determined that at least one good thing should come out of the accident, so hopefully we can raise plenty of money for three great charities by taking part in the Great North Run.”

Associate Professor Kathryn Nankervis, who has supported Jonty in his rehabilitation from the head injury, said: “I’m really looking forward to doing the Great North Run with Jonty.

“This time last year it would have been the stuff of dreams. I know he’ll get round no problem. We’ve had the whole team at Hartpury on it.

“All our colleagues in sport have helped, so we’re hoping we can do them proud and raise loads of money for our charities.” 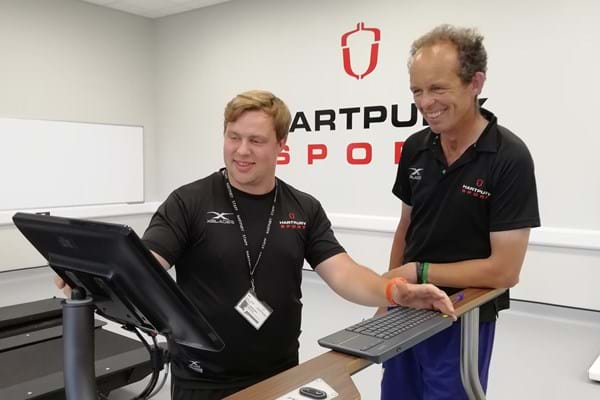