She had claimed her 10th success after proving too good for her rivals in the NAF Five Star Magic CCI4*-S competition on Quarrycrest Echo, in which she also finished runner-up aboard Brookfield Inocent.

Ten wins for the year soon became 11 as she added the NAF Five Star Superflex CCI3*-L title to her 2019 count.

Jayne McGivern’s Quarrycrest Echo will head to Luhmühlen later this month to contest the European Championships.

Piggy said: “Red (Quarrycrest Echo) was fantastic – he’s just such a pleasure to ride cross-country. He’s very easy and so it’s easy to be economical and to be quick.”

Piggy's other ride, Brookfield Inocent, is still a relatively new addition to her string, joining her yard in 2018.

“He may well follow in Red’s footsteps in being a quick and easy cross-country ride,” said Piggy.

“People say I’m so fast, but I’m really not – with some horses, you can get in a gear and change the gear so quickly.

“When they’re confident, you can ride so much quicker in the rhythm and in the lines, because you leave the adjusting so late.

“That’s what I can do with those two and having the quality of gallop that they have helps, too. To finish first and second is really exciting.”

Pippa Funnell may have relinquished her two-phase lead on time penalties, but solid rounds aboard MGH Grafton Street, who added eight time penalties, and overnight leader Billy The Biz, who added 10, saw her finish third and fifth respectively.

Pippa said: "I had a great spin on all of mine – I’m chuffed. I was never going to threaten Pig, I knew that, but I had great rides.”

Both Piggy and Pippa jumped clear rounds over Paul Connor's showjumping track after the second phase was moved indoors due to high winds.

Hartpury's efforts to maintain good conditions and continue running were praised by Pippa.

“A few places got a bit cut up, but I thought they were great courses, and they encouraged positive riding,” she said.

“It was a very good track, and I thought Eric did a great job. Horses had to be fit because of the conditions.”

Hartpury Equine Director Philip Cheetham added: “Running an event such as this is a huge team event, particularly when the weather presents challenges like it has this week. We are very grateful to the entire team.

"We'd also like to thank the competitors and their supporters who showed understanding and flexibility throughout.

“This allowed us to run a successful event which provides such an important preparatory run for those riders heading for championship events and autumn three-days.” 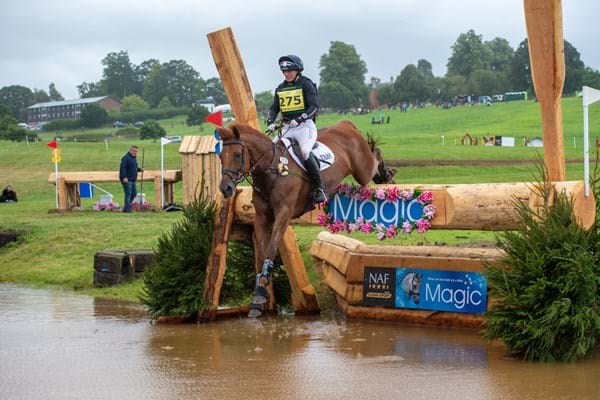