After the top scores were tied at the end of five rounds, Joe secured his place on the illustrious roll of honour after holding his nerve to win a play-off to decide the championship winner.

Underlining the strength of the Golf Academy at Hartpury, Matt Millar took fourth place in the same competition, while Julia Kerrigan was runner-up in the girls’ event.

Like Joe, Matt and Julia are studying the Level 3 Extended Diploma Sport (Golf) as well being members of the Golf Academy at Hartpury.

First staged in 1993, the Junior European Open is widely regarded as the toughest test in junior golf and attracts many potential world-class players of the future.

Current stars who have competed in the past include Luke Donald and Justin Rose – both former number one in the world – who each finished in third place when they took part in 1993 and 1996 respectively.

Matt Ellis, Manager of the Golf Academy at Hartpury, said: “The standard of play in the Junior European Open is exceptionally high and it’s an extremely tough tournament to win.

“Joe had a testing summer when results didn’t go quite as well as he’d hoped, but he has shown the right attitude, worked hard at his game and remained patient.

“We’re absolutely thrilled that he has gained his reward in one of the biggest tournaments in the world for junior players.

“Joe is looking to go to the United States to play golf next year and he has already received some great offers on the back of winning the Junior European Open.

“Matt has had a great year and can look back on another superb result in finishing fourth, while Julia should be really proud about taking second place in the girls’ competition.

“It’s been another really successful year for the Golf Academy thanks to the continuing hard work and commitment of all the students and coaches involved.”

Students from Hartpury’s Golf Academy have won a number of titles this year, including the British Schools and Colleges Ladies Open 2019 and a British Universities and Colleges Sport Golf league title, as well as gaining success at the Intercollegiate Tour (ICT) finals and AoC Sport Championships.

Golf students at Hartpury – one of the UK’s leading specialist education providers – have access to a wide range of facilities on campus, including a 10-bay indoor range, a 5x4m indoor putting green, a USGA short-game area and an outdoor artificial putting green.

Golf students can also access local courses and professionals on a regular basis, including the facilities at key partner Tewkesbury Park Golf Club. 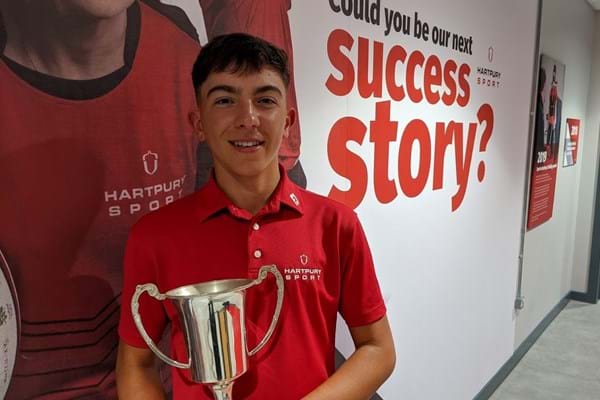