Hartpury College students are celebrating yet more sporting success at one of the most famous golf courses in the world.

James Freeman and Bryn Thomas – both members of Hartpury’s Golf Academy –finished first and second respectively in the men’s gross competition at the AoC Sport Open Championships at The Belfry.

Hartpury enjoyed further success at The Belfry as the men’s first and second teams were winners and runners-up respectively in the team competition, which is based on scores from the singles event.

All the players who represented Hartpury at The Belfry are studying a Level 3 Extended Diploma Sport (Performance and Excellence) Golf).

The Belfry has hosted the Ryder Cup four times – more than any other venue – as well as numerous European Tour events.

Matt Ellis, Golf Academy Manager at Hartpury, said: “The AoC Sport Open Championships provided our Golf Academy students with an opportunity to walk in the footsteps of some of the biggest names in the sport.

“That sort of opportunity doesn’t come along very often and our players seized it with both hands.

“Considering the wet and cold conditions, James carded a really great score of -5 for a 65 to win the men’s competition.

“It was extremely pleasing to see Bryn maintaining his good run of form by shooting another 66, the same as his score in his most recent Intercollegiate Tour (ICT) competition, to take second place.

“Our first team won the team event with -9, which was another excellent score in the conditions, to keep up their run of strong performances after they shot -12 in the last ICT match.

“Overall, it was yet another successful competition that all our players can take plenty of positives from as they look to develop their game alongside their academic commitments.

“We have a strong group of players in the Hartpury Golf Academy again this year so winning selection for the team is a superb achievement – the scores so far this year have been excellent.”

Golf students at Hartpury – one of the UK’s leading specialist education providers – have access to a wide range of facilities on campus, including a 10-bay indoor range, a 5x4m indoor putting green, a USGA short-game area and an outdoor artificial putting green.

Golf students can also access local courses and professionals on a regular basis, including the facilities at key partner Tewkesbury Park Golf Club.

Picture: James Freeman receiving his winner's trophy at The Belfry 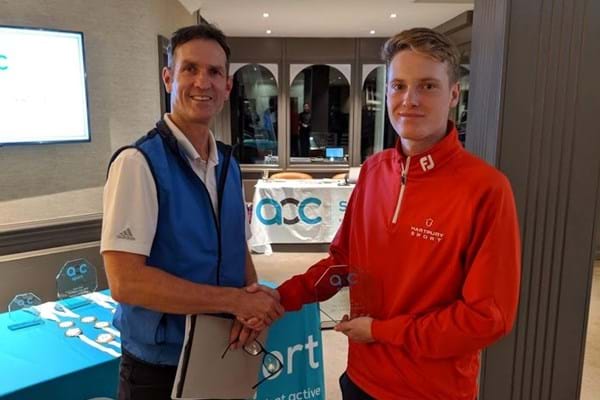