Hartpury University’s Lucy Dumbell has contributed to a thought-provoking new book exploring the roles of women in sport, as competitors and in positions of power.

Lucy, Academic Registrar at Hartpury University, has co-authored a chapter entitled ‘From the battlefield to the boardroom – the place of gender in sex-integrated sport’ for the Routledge Handbook of the Business of Women’s Sport.

The chapter, written in collaboration with Donna de Haan, Associate Professor at The Hague University of Applied Sciences, raises the question of whether sports that provide opportunities for men and women to compete against one another, such as equestrian sport, can help promote gender equality on the field and in the boardroom.

Lucy said: “I am extremely proud to be among a select number of authors from around the world to have contributed to the Routledge Handbook of the Business of Women’s Sport.

“The book goes further than any other publication in surveying current theory and research on the business of women’s sport.

“It will be of interest to students, researchers and people working across the whole spectrum of women’s sport, as well as members of the general public with an interest in sport and business.

“My research interests at Hartpury University have focused on equestrianism, where the international governing body, the FEI, has demonstrated gender equality in its top two posts for more than 30 years, which is unusual for international sporting federations.

“Equestrian sport could contribute valuable insights to support the work aiming to further enhance female participation in the Olympics – 45 per cent of all athletes were female at the 2016 Games – and increase gender equality within governing bodies of international sporting federations.”

Lucy’s previous research within the Equestrian Performance Arena at Hartpury has include the demographic profiling of British Olympic athletes in the 21st century and equestrian sport at the Olympic Games from 1900 to 1948.

Picture: Lucy Dumbell with the book ‘From the battlefield to the boardroom – the place of gender in sex-integrated sport' at Hartpury 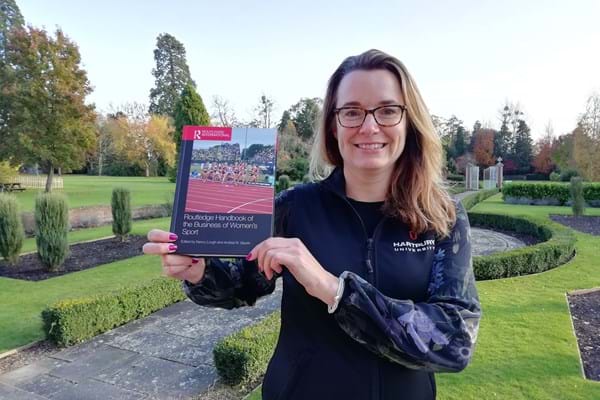