An investigation by Hartpury University – one of the world’s largest equine educational establishments – has uncovered multiple causes for the staffing crisis within the UK horseracing industry.

The in-depth study, carried out in affiliation with the British Racing School, analysed the views, opinions and concerns of junior and senior racing staff and racehorse trainers in an attempt to provide some clarity about why the current problem exists.

Inadequate management training for senior staff, the departure of employees aged over 25, and difficulties in finding a work-life balance, all emerged as major concerns.

A perceived lack of work ethic from younger workers by older members of staff and trainers, the view that racing is ‘a way of life’ rather than a job, and that an increase in race fixtures was proving challenging for staff, were also cited as having an impact on employee retention.

The media’s portrayal of the industry as being in a state of crisis and that it was a hard and lowly paid job were having a negative effect on staff recruitment, according the study.

Low wages, lack of career progression and issues securing affordable accommodation were also highlighted as reasons for the difficulties in recruiting and retaining staff.

Despite more than half of the 30 participants in the study stating they had considered leaving the racing industry, 83 per cent would still encourage young people to enter the industry.

Some participants also suggested that racing was the best equine industry to work in, with regards to pay.

The research was carried out by Hartpury University graduate Elizabeth Juckes, supported by Dr Jane Williams and equine programme manager and lecturer Emma Davies, for a postgraduate dissertation towards a masters degree in Equine Science.

“The British Horseracing Industry has been experiencing a labour shortage since the 1970s,” said Elizabeth, who presented her findings at the Horseracing Industry Conference 2020 delivered by the University of Liverpool in partnership with the Racing Foundation in London.

“Despite recent improvement reported in staff retainment, there is still significantly high reported staff turnover compared to other sectors, and trainers experience challenges with recruiting qualified and experienced staff.

“A survey of UK racehorses trainers carried out in 2018 found that nearly one in five had experienced difficulties in retaining staff.

“The purpose of our study was to investigate current staffing challenges experienced by UK horseracing employers and employees, and to formulate strategic targets to address any issues identified.

“This study identified that the majority of staff perceive the industry to be in a staffing crisis, and they perceive working hours, salaries, fixtures and skills gaps, in both entry and senior management staff, to be mitigating variables in retention.

“In addition, generational differences in work ethic and the use of social media to gain employment elsewhere with ease, may be increasing the likelihood of staff leaving the industry, or frequently changing job role.

“Whilst the racing industry has a strong team of dedicated employers and employees who are passionate about working in the industry, there appears to be significant skills gaps identified (racehorse management and human resource management) that are contributing to the staff retention issue.

“High workloads, poor work-life balance and a lack of training and career progression are also negatively influencing retention in the racing industry.

“A reduction in the number of race-day fixtures could be one strategy that may ease the day-to-day pressure within racing stables.

“Supporting senior staff to do their jobs effectively through the implementation of improved management training would enhance their job satisfaction and by association should be beneficial for the workforce they manage.

“Ongoing issues such as the lack of job satisfaction and motivation voiced by racing staff also need to be addressed.

“The value of training implemented should be evaluated and reviewed to measure efficacy.

“Whilst retention will remain an issue for the racing industry in the short term, an opportunity exists for the racing industry to consult with all stakeholders to formulate and implement a strategic plan to address the underpinning themes identified by the study to improve the long-term perspective and safeguard the future of racing and the staff who work within it.

“We’d like to thank the 30 members of staff and racehorse trainers who participated in the survey for their time and effort in providing their feedback.”

This latest research is among a number of ways in which Hartpury University, based only 13 miles from Cheltenham Racecourse, works closely with the UK horseracing industry.

The world-renowned equestrian centre is supporting efforts to train the next generation of jockeys after investing in a Racewood MK10 Racing Simulator to further enhance its extensive range of state-of-the-art facilities. 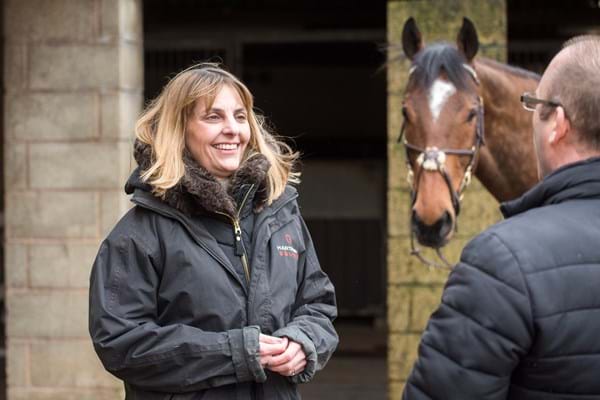