Hartpury College agriculture graduate Jo Lawrence has been nominated for a prestigious award and selected to appear in the latest series of a TV show about farming.

The 20-year-old, who studied a Level 3 Extended Diploma in Agriculture at Hartpury, has recently been featured in a new episode of Channel 5’s Springtime on the Farm, which showcases the hard work and dedication of farmers across Britain.

She is also in the running for the Young Farmer of the Year Award in the 2020 Three Counties Farming Awards, for which the winners will be announced on June 11.

Jo was aged only 17 when she started managing her family’s 200-acre farm in Allensmore, Herefordshire following the death of her father Bob, aged 50.

She starts work early and finishes late, tending to livestock, including sheep and beef, and maintaining arable crops in all weathers.

As well as the award nomination and TV appearance, Jo’s commitment to the farm has been recognised through a number of articles about her in national and regional newspapers.

“Appearing on Springtime on the Farm was a fantastic experience for me and I’m delighted to have been nominated for the Young Farmer Award at the Three Counties Farming Awards,” said Jo.

“I don’t imagine that any farmer gets up each day thinking about winning awards – it’s not about that – but it’s still nice to gain recognition for the work that we do.

“I’m up around 6am to feed the stock and check on them, so there’s no such thing as a lie-in.

“It doesn’t come without its tricky moments, but I love it, I wouldn’t do it if I didn’t love it.

“I was very lucky that Dad had taught me everything, we did ­everything together and shortly before he died he brought me into the decision-making at the farm so we were already a team.”

Jo, who receives support from her mother and brothers, added: “I wouldn’t change it for the world and I feel closer to Dad here.”

The latest series of Springtime on the Farm, presented by Adam Henson and Helen Skelton, started on Easter Monday.

The range of agriculture qualifications offered by Hartpury provide routes into a diverse range of career opportunities within the UK and international agriculture industry, including farm management, agronomy, policymaking, research, science and consultancy.

Students at Hartpury benefit from one 400-hectare commercial farming business across five rural sites that supplies Muller, Sainsbury’s and Glencore.

The state-of-the-art facility showcases the production, welfare and financial improvements that smart farming technology can bring to farmers and producers, to further increase their overall farm performance and productivity.

In recognition of the success of its dairy herd and facilities, Hartpury was announced as the winner of the Promar International Milkminder Manager of the Year 2019 – Regional Award for the South of England. 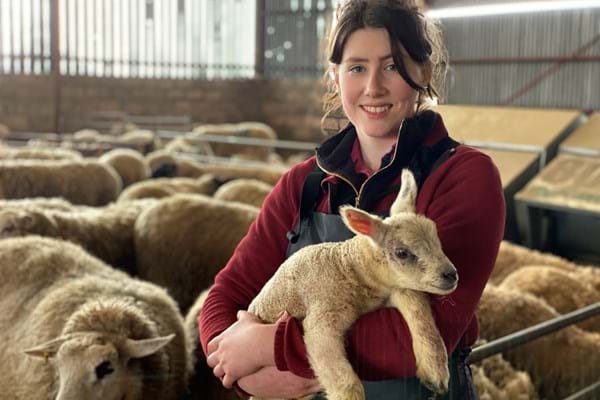