Hartpury students will receive specialist coaching from a former England and Gloucester Rugby player at one of the top women’s rugby clubs in the UK.

It follows the appointment of James Forrester as forwards coach at Women’s Premiership club Gloucester-Hartpury Women’s RFC – a partnership between Hartpury University and Hartpury College and Gloucester Rugby.

After retiring from rugby in 2008, he gained qualifications in both nutrition and personal training before moving to Singapore in 2009, where he was the head coach of Singapore Rugby.

James, who founded The Huddle health and fitness gym in Cheltenham following his return to the UK, will work as a key member of the coaching team headed up by Sean Lynn at Gloucester-Hartpury Women’s RFC.

James, who has coached Hartpury University’s BUCS rugby teams, said: “I am really excited to have been given the opportunity to work with some of the UK’s best athletes in women’s rugby, which continues to go from strength to strength.

“I’ve really enjoyed my two years at Hartpury University. Coaching in such an ambitious environment has been rewarding and I look forward to continuing my role with the BUCS teams and now the Gloucester-Hartpury Women’s players.

“From working with Sean Lynn, it is clear that we have a really strong squad this year and I look forward to the hard work starting this summer.”

Many past and present members of the Gloucester-Hartpury Women’s RFC squad are current or former Hartpury students who have gained international caps, including England World Cup winner Natasha Hunt, Kelly Smith, Zoe Aldcroft and Tatyana Heard.

James Forrester has been appointed to his new role at Gloucester-Hartpury Women’s RFC following the departure of Rupert Harden.

Sean Lynn, Head of Women’s Rugby at Hartpury and Head Coach of Gloucester-Hartpury Women’s RFC, said: “It’s such a shame to see Rupert Harden moving on to a new adventure and I wish him well.

“The exciting appointment of James Forrester onto the coaching team shows just how much everyone at Gloucester-Hartpury Women’s RFC wants the club to maintain its progress on and off the field.

“Having been an elite athlete for over 10 years, James brings a huge amount of knowledge about the practical application of nutrition and fitness to the team.

“James has a great working relationship with the BUCS players at Hartpury and he always strives for the very best, so I’m sure he will be fantastic addition to the coaching team at Gloucester-Hartpury Women’s RFC.

“I’ve absolutely no doubt that James’ experiences of playing at the very highest level for more than a decade, and his knowledge about the practical application of nutrition and fitness, will bring immense benefit to the whole squad.”

Rugby students at Hartpury have access to a range of world class-facilities.

Hartpury has also become the first university in the UK to gain re-accreditation for its Elite status within the UKAD Clean Sport Accreditation. 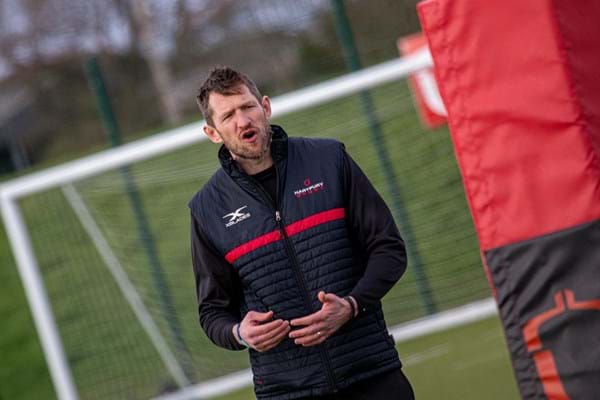