Hartpury is joining forces with Team Bath Netball to support the development of professional netball players.

Hartpury Netball Academy Manager Holly Duerden said: “The great thing is that this is an extension of a continuing atmosphere of collaboration between Bath and Hartpury for the good of netballers themselves.

“It will open up significant opportunities and will help us to develop together players of the likes of Sam Cook and Paige Reed, who have played at Superleague level and who have strong Hartpury connections.”

U18 players joining the ADC at Hartpury, where there are top-flight facilities and a performance environment including a new double-court netball hall, have the opportunity to trial for places into Team Bath U17 or U19 Academy squads.

Players will also be able to access visits to Team Bath to feel what it’s like to work with Superleague coaches and international medal-winning athletes such as Eboni Usoro-Brown, Sophie Drakeford-Lewis and Imogen Allison.

Holly Duerden added: “We’re absolutely delighted to have strengthened our already successful association with Team Bath in this way.

“As a new base for a Team Bath Netball ADC we look forward to providing opportunities for our students looking to benefit from our strong links with major sports organisations, as players or team support staff, such as coaches, analysts or physiotherapists.”

In the past season, Hartpury netball players were Gloucestershire County U-19 champions, South West Netball Regional U19 champions, and runners-up at the England Netball National Schools U19 Championships.

In addition, they formed the squad who were named AoC West Midland champions and had also reached the semi-finals of the AoC Sport National Netball Cup.

As well as top-level coaching and exceptional sports facilities, students have access to performance services that can include physiotherapy, sports psychology, nutrition advice, lifestyle support, and strength and conditioning.

Marc Richards, Assistant Director of Elite Sport at Hartpury, added: “This is an exciting relationship for Hartpury and will add value for our students both in the delivery of their courses and in the performance environment featuring our recent multi-million facility addition and our performance support delivery including physiotherapy, sport science, strength and conditioning and performance analysis.”

Team Bath Netball are five-time Superleague champions and were heading the table when this year’s Superleague was curtailed by Covid-19.

More than 100 players have emerged from Team Bath to take full or age-group international honours in the past three decades.

Team Bath Netball Academy Manager Natalie Roddy, who heads up the provision of ADCs across the South West as part of the University of Bath-based netball Superleague Club, said: “This is a fantastic and energising development for 15 to 18 year-olds.

“They will be able to tap into the renowned facilities and expert resources of two West Country sporting powerhouses.” 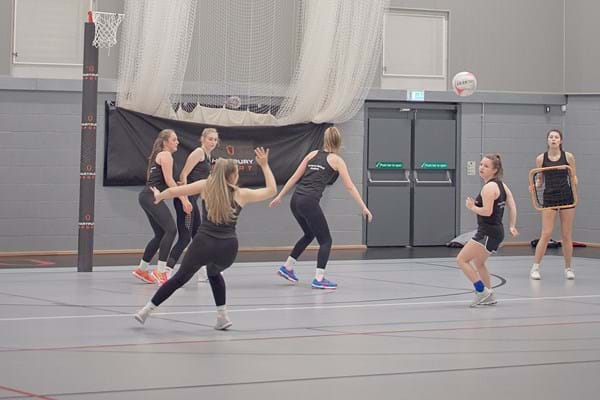