Hartpury University has taken part in a groundbreaking study employing in-match recording techniques to better understand the impact of psycho-behavioral momentum on golfers during competitive matchplay.

Hartpury University’s Geoff Lovell, Professor in Sports Psychology and one of the co-authors of the report, said: “In light of limitations to previous research, specifically those related to a dependence on recollected data and team-sport participants, the purpose of this current study was to understand how high-standard golfers experience PBM during a competitive matchplay situation.

“Specific objectives were to understand what high-standard golfers perceive as significant triggers for both positive and negative PBM in real-time, and what strategies they might employ during a competition to maintain positive PMB and to overcome negative PBM.”

The findings of the research paper, which has been published in the Journal of Applied Sport Psychology, was based on the responses from 37 A-grade players in Australia playing at the highest standard of non-professional competitive golf.

These key contributors are unexpected events (discrepancy between players’ expectations and reality); control (feeling in control: cognitions, emotions, behaviors, and outcomes; and appearing in control); temporality (a perception that match pressure and intensity is required to generate psycho-behavioral momentum); and pressure (application and maintenance of psychological pressure upon opponent, and the management of pressure applied by opponent).

Professor Lovell said: “Despite all golfers expressing an awareness of the effects of unexpected events on PBM, few appeared to use strategies to manage expectations during competition while others demonstrated a lack of awareness.

“Consequently, golfers that were able to manage expectations were interpreted as less likely to experience negative emotions associated with negative PBM.

“Two facets of control were found to be important for perceptions of PBM; feeling in control and appearing in control.

“If an individual feels in control, they will be more inclined to attribute success to oneself and failure elsewhere, thereby increasing the likelihood of perceiving positive PBM and defending against negative PBM.

“From a practical standpoint, individuals may be able to be taught and encouraged to use cognitive strategies, such as mindfulness, to increase perceived control, which will help them respond adaptively to the demands of their environment.

“The notion that temporal location could influence PBM perceptions was a novel and unexpected finding.

“From a practical perspective, if a player believes he or she can create PBM from the beginning of the match, if not before, and not have to react to PBM perceptions when the match is potentially in the balance, this would provide a competitive advantage.”

Hartpury – the UK’s premier sport and education setting – offers a range of undergraduate and postgraduate degrees, and PhDs.

Picture: Professor Geoff Lovell at the driving range at Hartpury 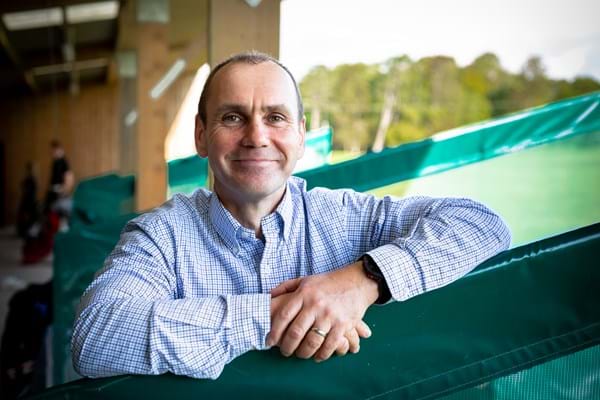