Every night I feel the touch of my feet against the ground, the sensation of my legs moving across the floor as I walk.

The feeling of freedom is unbelievable but it never lasts long enough.

For the past eight years I have been permanently in a wheelchair without any use of my body below the sternum.

Nowadays, the only time I get the sensation of moving my legs is in my dreams. When I wake up, I still think I can walk and regularly fall to the floor after my legs give way.

You’d think after eight years I’d remember that I can’t walk, but it’s not as easy as remembering that. The mind can play powerful tricks on you.

This is one of many battles I had to face over the years but I wouldn’t change what happened, it made me who I am today.

To understand the full story, we need to go back to when it all started, Monday 8 March 2010.  That day, I went to school as a normal Year 7 pupil, slightly tired, groggy and not ready for another week of education after spending a long weekend at a scouting camp.

Unfortunately my grogginess had nothing to do with lack of sleep; it was something far more sinister. I collapsed and didn’t regain consciousness for a week. I had suffered a stroke which moderately affected the right-hand side of my body. Although strokes are uncommon at the age of 12, they aren’t unheard of.

The following five months resulted in two more strokes that caused significant impairment on my right-hand side and left leg.

I had to relearn how to walk, talk and eat. It wasn’t a nice time, but it taught me to persevere and not give up.

After being discharged from Frenchay hospital in Bristol, I received six months of home-schooling before making a gradual transition into mainstream education.

I desperately wanted to be back playing sport.

Opportunities for disability sport weren’t as numerous pre-London Olympics 2012. It wasn’t easy to find a club or individual who was willing to take on somebody with impairment.

Eventually, a coach, Carolyn Franks, a local throws coach at Cheltenham Harriers, agreed to let me train with her to help with my rehabilitation.

After a few sessions, Carolyn got in touch with a talent identification officer with British Athletics because she noticed I had potential as a para-thrower. This was how I started competing in disability sport.

Fast forward to the end of 2011, I had won six national junior titles and broken a world junior shot putt record in the F37 classification.

London 2012 was on the horizon but it wasn’t my primary focus. I was 14 and would have opportunities further down the line.

The 2012 season resulted in more national junior titles and 2 world junior records in the F37 class for the shot putt and discus. I also became the second disabled athlete to qualify and compete at the English schools athletics championship, an able-bodied competition, in the junior boys’ discus throw where I finished 15th out of 17.

I moved schools in November 2012 due to a diagnosis of PTSD, which became difficult to manage.

I had my injury at school in an art classroom. Two years later, I struggled to cope with the trauma of walking past the art room and reliving the incident. It caused me to self-harm and relive traumatic memories.

After the move, I still had PTSD flashbacks which were traumatic but I started to be able to deal with them more effectively.

2013 didn’t go off to a brilliant start as I had a form of seizure that caused my legs to completely stop working, meaning I had to use a wheelchair full-time.

Adapting to life in a wheelchair wasn’t as hard as I originally thought; moving around was easier than before.

The one thing I did notice, though, was that people immediately started talking to my friends or parents when we were out rather than me.

Nothing had changed apart from me having wheels instead of working legs, but people seemed to perceive that I may have an intellectual impairment because I was in a wheelchair.

I continued to train for athletics and was reclassified to compete as a seated thrower in shot put and discus.

To continue competing internationally, I had to receive an international classification. British Athletics solved this problem by selecting me to compete at the Fazza International (IPC Grand Prix) in Dubai, United Arab Emirates.

My new class was F32. At the competition, I made history by becoming the first British athlete in the F32 class to break world records in the men’s shot putt and discus. Two days later, I was back at school, halfway through year 10.

Looking back, it was quite a surreal time because I spent most of my time training or travelling to compete. It was rare for me to be at school every day of the week.

I used to take school work with me to complete when there was downtime. One thing I always stuck by, was to be humble and not big-headed. I could win a competition one day but I could also equally lose a competition.

In May 2013, I was reclassified as an F34 athlete and achieved an ‘A’ standard and broke a British record (qualification standard) in shot put to qualify for the IPC World Championships.

A month later I got the phone call to say I was selected to compete at the Championships, which were being held in Lyon, France.

I was the youngest male on the GB squad and one of the youngest competitors at the World Championships. There was pressure to do well; there always is when you put on the GB vest.

My target was to achieve a personal best, anything over 11.41m, and finish in the top 6. I will always remember Thursday 25 July, it was the day I became world champion and world record holder in the men’s F34 shot putt with a throw of 13.38m.

Hearing and singing the national anthem on the podium with a gold medal around my neck is something that will stay with me forever.

On my sixth and final throw, I slipped and my shoulder landed onto the pole of the throwing frame. Unfortunately, this damaged the joint and socket and resulted in ending my 2013 season early.

I went back to school later than the rest of the students because the World Championships finished in late August. I felt like an outsider because I hadn’t seen my classmates for over four months.

I dedicated myself to train as hard and as I could. To me, gold medals were worth distancing myself away from friends and pushing my body to its limits.

The injury to my shoulder meant I couldn’t push a wheelchair, it made me dependent on others.

This is something that made me realise that it’s okay to ask for help – assistance does not mean weakness.

Nine months later, the injury had recovered but I still couldn’t train as much as I wanted, which led to depression, self-harm and counselling.

To distract myself, I focused on my studies because I knew they were essential for the future.

I knew I wanted to go to Hartpury College to study Sport and Exercise Sciences. This became my motivation to study and revise as there was a goal at the end.

Thankfully, I exceeded my expectations and passed all of my GCSE’s and received an offer to study at Hartpury. I was over the moon!

I first went to Hartpury College in the September of 2014.  I wasn’t sure how I’d fit in but I was welcomed with open arms and I knew that it was the right place for me.

The teachers really knew their stuff and were approachable. My arms soon became strong enough to get me up the hill from Sports Academy to the main campus.

I missed competing and was approached by a coach at Hartpury who asked if I wanted to try rowing.

Hartpury College has one of the most successful talent identification paths for Rowing in the UK, so I took a chance and said yes. Three months later I was invited to join Great Britain’s Para-Rowing development squad.

While everything was going brilliantly at Hartpury, I struggled to move about in my own home as it was not designed for a wheelchair user.

I was reliant on my parents to do most things for me. I had to travel to shower at the hospital or Hartpury because our bathroom at home was upstairs and there was no lift.

A friend sent an application to DIY SOS, BBC’s renovation programme, to help me become independent. It was successful. Upon the reveal of the house, I was informed that a fitness company had sponsored me and built a gym at the bottom of my garden. I was in shock and cried a lot because someone saw potential in me.

I joined Hartpury’s sports academy and, thanks to the way that Hartpury  supports its students, trained full-time between my studies, making me one of the first Para-athletes to join an elite academy squad at Hartpury.

I won three indoor titles and an outdoor national title, along with podiuming at an international regatta. I also broke two world indoor rowing records in the men’s arms and shoulders 1,000m and 2,000m.

I always knew that at some point my progress would start to slow, but it happened much sooner than planned.

Just months after breaking my world record, I had to face the fact I could no longer perform.

I’d given seven years of my life to Paralympic sport, effectively meaning I gave up my social life, my teenage years and so much more. Competitive sport had taken a toll on my body, both physically and psychologically.

As much as I loved sport, I could no longer be an athlete. I went from being a potential Paralympic medallist to a university student, and the transition was not easy.

It was a challenging time, my mental health deteriorated. I self-harmed to such an extent that I required surgical reconstruction of my right leg. It’s a miracle that my leg wasn’t amputated.

The support Hartpury gave me throughout it all, both academically and personally, set me on the road back to health.

The nursing team at Hartpury are outstanding and helped me through some extremely tough times during my time there.

When I was able-bodied, I took a lot of things for granted. Nowadays, I have to be conscious of my body temperature as I overheat easily and I have to deal with the psychological effects of my injury, like dreaming I can walk and waking up on the floor. It doesn’t get easier but it gets manageable.

I will always miss being to walk but I cannot move forwards if I’m always looking backwards. Even though I’m no longer an athlete, I’m still the same person.

The path I’m now on is not the one I set out on, but it’s exciting all the same.

I’m on a BBC Production Talent Scheme, working on shows like Sports Personality of the Year and the Olympic Games.

It’s an incredible opportunity that I wouldn’t have been able to achieve without Hartpury. My future career will have a positive impact, and that’s down to the hard work that we’ve all put in over the last five years. 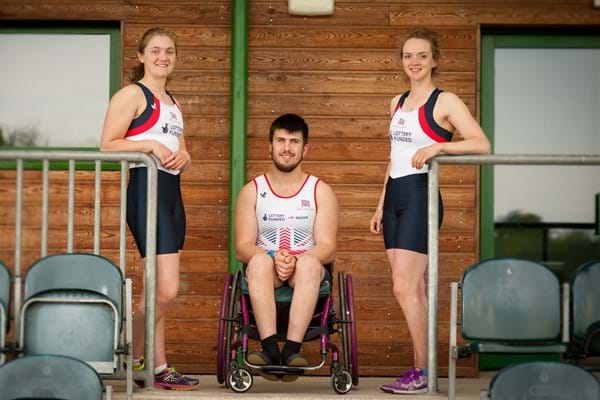