While the UK wonders what’s around the corner on the Covid-19 front, Hartpury alumna Ellena Perry can at least look to the future with renewed confidence and belief about the way her rugby adventure is headed.

Weeks into her second season with Gloucester-Hartpury Women’s RFC – a partnership between Gloucester Rugby and Hartpury University and Hartpury College – she was recalled to the England Women’s squad to gain her 10th senior cap in a dramatic victory over France.

In what was her first England appearance since last year’s autumn internationals, Ellena watched on as team-mate Emily Scarratt held her nerve to strike a last-minute penalty and secure an unforgettable 25-23 victory at Twickenham.

“It did feel really good to be back in a white shirt again,” said Ellena.

“After the autumn internationals last year I wasn’t really enjoying my rugby, but with everything surrounding Covid-19 and being forced to take a break from rugby because of lockdown, I have started to enjoy it again and now look at life with a fresh pair of eyes.

“I used to put myself under an enormous amount of pressure, but now I’m just trying to enjoy my rugby, working as hard as I can and doing my best.

“If it comes, it comes, as it did with the call-up for the game with France, but if it doesn’t, it doesn’t.

“The funny thing is, I didn’t actually know we’d won the game against France until a few minutes afterwards. When I’d last looked at the scoreboard it was 23-20, so I thought Emily was kicking to draw, so when everyone was going crazy and celebrating I thought ‘Yes, it was good to come back and get a draw’.

“It was only when I looked up at the scoreboard again when we were in the team huddle that I knew we’d actually won!”

Ellena’s switch to Gloucester-Hartpury from Saracens Women, just before the start of the 2019-20 Premier 15s season, brought her back to the Hartpury campus where she spent two years gaining A-levels in Physical Education, Psychology, Business Studies and Biology, as well as being a member of the Women’s Rugby Academy.

It was during that time at Hartpury, where students are able to study alongside their training and playing commitments, that Ellena achieved her ambition of playing at the highest level in the women’s club game, signing for Saracens.

It was also where she met her partner, Gloucester Rugby prop Alex Seville, while they were both studying A-levels at Hartpury.

“Going to Hartpury was literally the best decision I could have made for myself back then,” said Ellena. “I’d wanted to go there ever since I’d seen the sports facilities while I was playing in a rugby tournament at Hartpury while still at school.

“On the academic side, all the tutors and the classes for my A-levels were great, while in terms of developing my rugby and kicking on with that, it was definitely the best place I could have gone to.

“The facilities are amazing and you’ve got the opportunity to train every day – it’s like a professional set-up.”

Five years on, she is enjoying being back at the campus that ignited her dreams of playing at the highest level, with the commitment and desire to ensure Gloucester-Hartpury Women’s RFC remain as a powerhouse in the Allianz Premier 15s.

“Last year I struggled with injuries, so I was in an out, but touch wood it’s been really good so far this season,” she said. “It’s such good place to train and develop, as a team and as an individual.

“Working with Sean and the rest of the coaching team is great, and all the girls in the squad are class. There’s a really positive atmosphere within the group and everyone is working hard to make sure we have a good season.

“Even though I was here last year, this season feels different. I’m enjoying it a lot more and actually it feels like my first season. 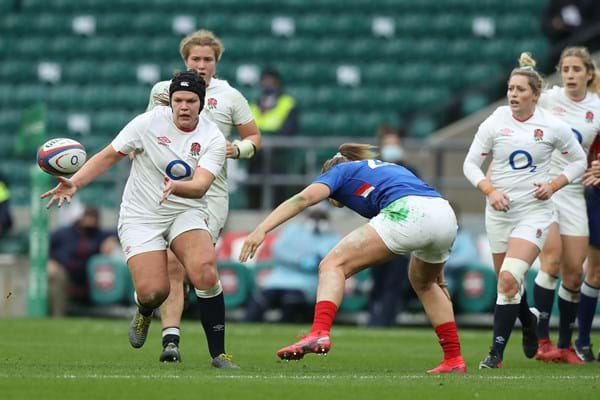