If football superstars Lionel Messi or Cristiano Ronaldo ever turn their attentions to the growing sport of beach soccer, the results of a study involving Hartpury University could help to further improve their astonishing goalscoring records.

In the first analysis of its kind, a research team that included Professor Geoff Lovell from Hartpury University made a series of breakthrough discoveries about the tactical aspects of the game related to goal-scoring strategy.

For the study, 12 national teams were analysed across 52 matches in all phases of the 2018 European Beach Soccer League tournament.

Professor Lovell said the research team found that the number of goals scored from a free-kick (39%), at which Messi and Ronaldo are renowned masters of their craft in 11-a-side football, was considerably higher than any other goalscoring strategy, such as an attacking move or a counterattack in open play.

As published in the journal Science and Medicine in Football, the study also discovered that those teams who employed the goalkeeper-line strategy, where the goalkeeper plays outfield to serve as a numerical advantage, was associated with increases in scoring opportunities and team performance.

It means that should either Messi (739 goals in 941 appearances for club and country) or Ronaldo (768 goals in 1,065 appearances) make a surprise venture into the world of beach football, the match scorers will expect to be kept busy.

“A plausible explanation for this higher percentage of goals scored from set-plays in beach soccer include the smaller size of the field, which potentially enables a higher frequency of shots from a set-play.

“A second potential explanation is that beach soccer match rules are designed to increase the number of shots on goal.

“For example, when a free-kick is awarded, teams are not allowed to set up a wall or block a direct shot at goal, unlike in 11-a-side football.

“The increased likelihood of free-kicks awarded with no wall and players capable of shooting from any area of the field typically results in a higher frequency of direct shots on goal.

“The chances are that neither Messi nor Ronaldo is likely to play in a high-profile beach football tournament, of course, but their brilliance at striking a ball from a free-kick situation means there’s absolutely no doubt they’d score lots more goals.”

Professor Lovell said the results of the study would better inform beach football coaches when implementing training schedules and tactics for upcoming tournaments.

This may lead to more goals being scored at the 2021 FIFA Beach Soccer World Cup in Russia, where the 16 teams are set to include reigning champions Portugal and five-time title winners Brazil.

Professor Lovell said: “Taking into consideration the amount of goals scored from set-plays, it is important for professional beach soccer players to practice isolated free-kick taking from various parts of the field.

“This finding further highlights the importance for coaching staff to allocate time throughout the training schedule for specific set-play practice.

“Beach soccer coaching staff may utilise the goalkeeper-line strategy with greater confidence as very few goals are conceded with the goalkeeper losing possession and likewise, there is a greater chance of the team progressing to later stages of the tournament.

“These data inform coaching staff to consider the goalkeepers’ technical ability when making team selections to optimise the goal-scoring potential of the team.”

Hartpury offers a range of undergraduate and postgraduate degrees, and PhDs. 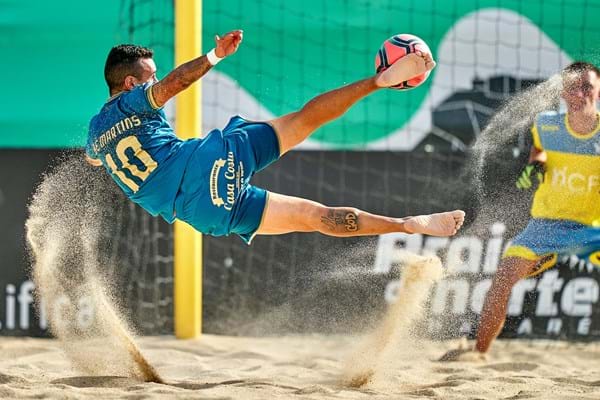