Olympic hopeful Charlie Brown, a member of the Modern Pentathlon Academy at Hartpury, has seized the opportunities provided during lockdown to improve his chances of fulfilling major sporting ambitions.

The A-level student, who won the U19 title at the 2019 British Modern Triathlon Championships, has been adhering to the detailed online training programmes put together for him by specialist coaches at Hartpury, Pentathlon GB and SportsAid.

They’ve provided him with advice and guidance covering all aspects of modern pentathlon disciplines – fencing, swimming, show jumping, pistol shooting and cross-country running – including technique, tactics, and strength and conditioning.

Alongside his A-levels, Charlie is also enrolled on the Diploma in Sporting Excellence at Hartpury, which provides student athletes with sports science support and understanding in areas such as psychology and nutrition.

As one of the top young athletes in the UK, Charlie is determined to be physically and mentally well prepared for when competitions finally return, with 30 May currently mooted as a potential date.

“It has been very frustrating not to be able to compete over the last few months, but I’ve still been working hard the whole time,” said Charlie.

“I can’t wait for the competitions to start again so that I can show that all the hard work has paid off and there’s a positive outcome at the end of it.

“I’ve done a lot of running training, keeping on top of my nutrition, and taken part in plenty of online sessions with my coaches, including Rob Flack, Hartpury’s Modern Pentathlon Academy Manager.

“I’ve been receiving all the support and guidance I’ve needed from Hartpury, Pentathlon GB and SportsAid, and I’ve trained the same, if not even harder, with no competitions happening.”

As well as a series of domestic achievements, Charlie was part of the winning U17 team and finished third U17 individually at the 2019 Laser Run World Championships in Hungary.

Looking further ahead, Charlie has set his sights on representing GB at the Olympic Games and other major world championships.

Charlie finished 17th in the final of the U17 boys’ event at the 2019 Youth World Championships in Sofia, Bulgaria – but that tells only part of the story.

“My luggage didn’t arrive in time for the semi-final, so I had to borrow some kit from a GB team-mate,” recalled Charlie.

“It was all very odd running around in the semi-final with someone else’s surname on my back, and my swimming shorts were too big for me.

“Fortunately, my own kit eventually arrived the day before the final. I’ll be looking to get to the worlds and Europeans again this year and hopefully I will do pretty well.”

Charlie said the DiSE programme at Hartpury – Pentathlon GB’s educational partner – was supporting his career ambitions in and away from sport.

As well as boosting his chances of going to university by offering 64 UCAS points, the diploma enables student athletes to evaluate their development in different aspects of their sport, including technical and tactical, in a high-quality environment.

“I chose Hartpury because it allows me to train in modern pentathlon to a high standard alongside studying for my A-levels.,” he said.

“On the DiSE programme, there have been various workshops and lectures on topics like managing your lifestyle outside your sport, nutrition and psychology, which I have found really useful and interesting.

“Because of all the sports facilities on site, it reduced the travel time for my training, allowing me to devote more time to my studies, and means I gain access to high-quality coaching and equipment.

“The discipline in which I’ve probably improved most because of Hartpury is fencing because I receive one-on-one coaching on site, instead of having to travel for a session as I used to.”

He said: “Charlie is popular member of the Modern Pentathlon Academy at Hartpury and a great role model. We’re absolutely thrilled with his development and what he has achieved in his sports career to date.

“His commitment to preparation and personal development is great. He’s always happy to accept and act upon feedback from his coaches, which is reflected in his many successes before lockdown and I’m sure will contribute to future success.

“We provide him with all the support and development opportunities we can at Hartpury to help him fulfil his sporting ambitions alongside his academic studies.” 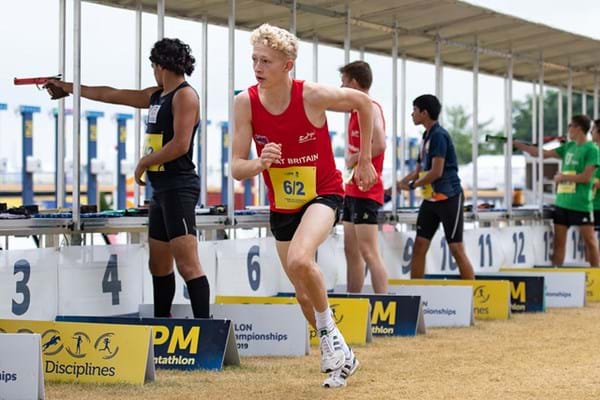