Dr Lucy Garrett from the Department of Animal and Agriculture at Hartpury University has written the following blog for Invasive Species Week about her work on Ascension Island in the South Atlantic.

Invasive Species Week, which runs until Sunday, is an annual event led by the GB NNSS (Non-Native Species Secretariat) to raise awareness of invasive species and how we can help prevent their spread.

Invasive species are one of the primary factors causing species declines around the world.

Invasive Species Week serves to highlight some of the major issues that non-native invaders can cause to the UK’s biodiversity and ultimately our economy.

Working in field-based conservation in some of the world’s most remote locations, I have seen first-hand the devastating effects that invasive species can cause to native fauna and flora.

For my PhD I worked on the remote UK Overseas territory Ascension Island in the South Atlantic.

The UK Overseas territories support some truly unique species and ecosystems and account for over 94% of the UK’s biodiversity.

Being so remote, it’s hard to image invasive species making it as far as Ascension Island, but unfortunately where there is human activity there are routes for invasives to hitch a ride or be accidentally released.

The seabirds I work on, the sooty tern Onychoprion fuscatus, are one such species that has suffered due to non-native predators being introduced to their breeding grounds.

Sooty terms are a small seabird that spend the majority of their lives at sea, only coming to land to breed in colonies that are so large and so noisy you can barely hear a person in front of you speak.

On Ascension they number around 200,000 pairs, breeding on the exposed black volcanic rocks at two areas called Mars Bay and Waterside.

Each pair of terns lays only one egg and it can take several months from laying to the time a chick is ready to leave the island and fledge.

They are also unlikely to re-lay should their nesting attempt fail. Once they leave, the juvenile birds can take up to five years before they themselves return to breed.

Though they have a life expectancy in excess of 20 years, sooty terns are thus vulnerable to nesting failures, which can have a devasting impact on population size.

Invasive predators were unwittingly released onto Ascension Island as stowaways on the ships of mariners that made camp there and included black rats and mice.

Cats were later released in an attempt to control rodent populations, but unfortunately had a devastating effect on the Island’s seabird populations, preying on adults and young.

Nesting seabirds that have evolved in the absence of such predators stand no chance at defending themselves against their attacks.

In 2006, the growing feral cat population was eradicated through efforts by the RSPB (Royal Society for the Protection of Birds).

Although the cat eradication has prevented further adult seabird mortality, it has led to an increased risk of rat predation.

By removing the rat’s primary predator, their numbers have increased un-checked, together with an increase in body size and life-expectancy.

The sooty tern population on Ascension Island has declined by over 80% between 1942 and 2005.

Other seabird populations on the island have benefited from the removal of cats, such as the masked booby Sula dactylatra and Ascension Island frigatebird Fregata aquila.

My research investigated the benefits of social groups or friendships that form between young chicks before they fledge.

Once chicks are about three to four days old they leave their nests, often just shallow scrapes on the bare ground, and group together in the open or under rocky outcrops.

I monitored their friendships by ringing them and resighting who they were seen with in the days that followed before fledging.

The outputs of this work revealed that friendships are stable up until a point where they then break apart and their number of friends reduces as they near fledging age.

This indicated a period of vulnerability, where having high numbers of friends seemed important. This could be related to predation pressures from black rats, which take chicks at any age.

The number of friends chicks had were a good predictor of daily survival, with those that had more friends having a higher chance of surviving. Cover was also important, indicating that chicks who were good at hiding were also more likely to survive.

Unfortunately, this tale of rats and cats is similar to other seabird nesting grounds across the world. On Gough Island for example, the mice have grown so large after the removal of rats that they are decimating seabird populations (Caravaggi et al. 2019).

Work to eradicate these introduced rodents on such islands is currently taking place and discussions as to the way forwards for Ascension Island restoration are also ongoing.

Whatever approach is taken, whether protection of certain areas from predators or whole island eradication, which can cost millions of pounds, careful consideration will be required so as to avoid issues with seemingly non-threatening invasives becoming an issue and protecting these magnificent seabird colonies from further decline.

My research was undertaken in association with the Army Ornithological Society and the AIG (Ascension Island Government) Conservation and Fisheries Directorate. 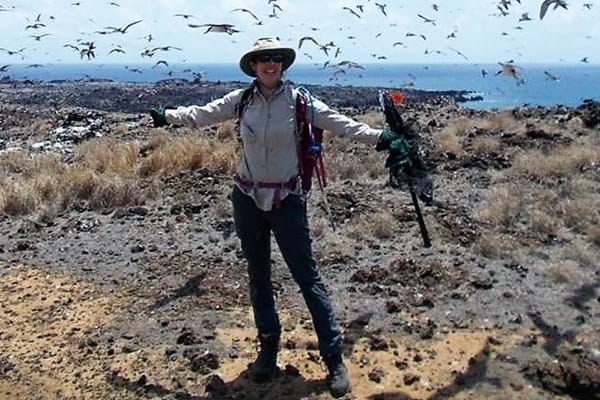