Hartpury is celebrating a landmark moment after five of its former students and Sports Academy staff became its first alumni to be named in a Team GB Olympic rowing squad.

Sisters Charlotte and Mathilda Hodgkins-Byrne and Chloe Brew, who all studied A-levels at Hartpury, are among the 45 rowers selected to represent Team GB at the upcoming Tokyo Olympics.

The trio were all members of the Rowing Academy at Hartpury – a national centre for British Rowing’s World Class Start programme.

More success came for Hartpury when former Rowing Head Coach Tom Pattichis and physiotherapist Steve Leonard won places on the Team GB rowing coaching team for the Olympics, which is scheduled to start on 23 July.

“We’re extremely proud of everything they’ve achieved as members of the Hartpury family to win their places in the Team GB Olympic squad in their various roles and we wish them every success in Tokyo for what promises to be the experience of a lifetime.

“It’s a landmark moment for Hartpury to have former students and staff in the Team GB Olympic rowing squad for the first time – we couldn’t be more delighted.

“To see former students and staff representing GB in Tokyo will be a massive inspiration for our current and future students and staff, particularly those involved in the rowing programme and our recently launched Hartpury University and Hartpury College Boat Club.”

Charlotte and Mathilda Hodgkins-Byrne, who were among the first students to enrol on the rowing programme at Hartpury, have been named in Team GB’s women’s quadruple skulls.

Chloe Brew has been selected for the women’s eight coached by Tom Pattichis, who became a British Rowing high-performance coach following his role as Rowing Head Coach at Hartpury.

He was also a physiotherapist that worked within Hartpury’s Medical Services department, so he had a dual role.

Student athletes, including those on the British Rowing World Class Start programme, are able complete the DiSE programme at Hartpury as long as they meet the relevant criteria.

The DiSE programme is a level 3 diploma qualification that is designed for student athletes identified by their relevant national governing bodies as having the realistic potential to achieve sporting excellence. 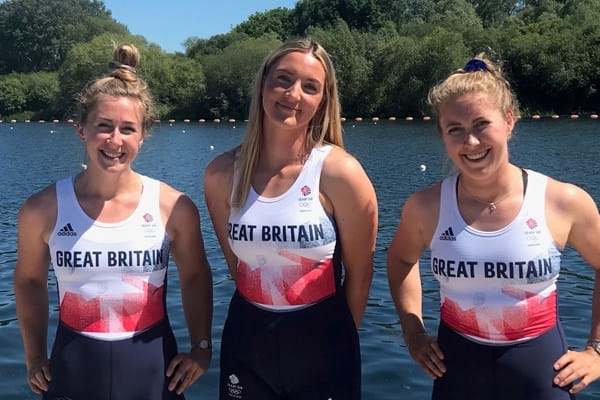