Hartpury alumni played a leading role in Great Britain's victory in today's women's rugby sevens quarter-final with a 21-12 victory over the United States at the Tokyo Stadium.

Holly Aitchison converted, and then added the extras to an Abbie Brown touchdown as Britain built a 14-point interval lead.

Joyce's second try early in the second half, again converted by Aitchison, gave the United States something of a mountain to climb, and even late tries by Kristi Kirshe and Naya Tapper couldn't repair the damage.

Great Britain captain and Abbie Brown said: 'We are all about our heart and desire. I am so, so proud of everyone. Jasmine Joyce is a force to be reckoning. She is quick and angry, she knows her role!

Team-mate Megan Jones added: 'Defence is half the game, we have to win that to be able to play our attacking game. We are not soft, we have got heart and some energy I can't explain. I am oozing with pride. We aren't here to win a quarter-final, we are here for gold.'

Many of those in the team are former members of the Hartpury's Women's Rugby Academy, one of a number of sports academies designed to help students nurture their sporting talents alongside their academic studies.

Sarah Lee, Head of HE Sport, told BBC Radio Gloucestershire how Mo Hunt showed talent in a number of sports before choosing rugby as her sole focus.

"Mo is one of those individuals that can turn her hand to anything. She was an incredibly talented netball player during her time as a student at Hartpury and could've easily pursued a career in that discipline as well as many others.

"Everyone at Hartpury is just so proud of Mo, Abbie, Holly, Megan, Abi and Alex. They are flying the flag for women's sport and rugby, and are surely inspiring the next generation of Hartpury students. We wish them all the best for their matches on Saturday."

Read more about Hartpury's impressive contingent of athletes, coaching staff and officials out in action in Tokyo. 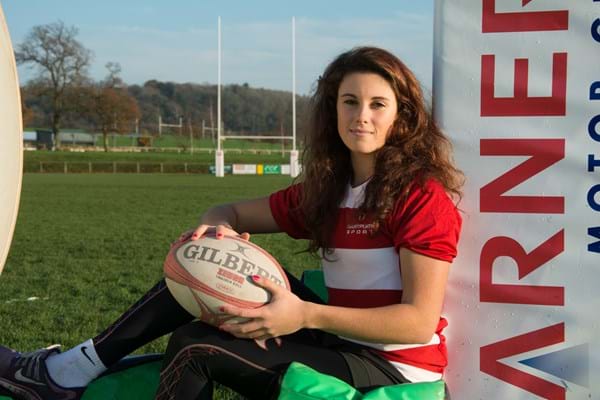