Hartpury University awarded three honorary degrees at its four annual graduation ceremonies on Thursday 3 and Friday 4 November, as well as recognising the achievements of 491 students who graduated from a variety of undergraduate and postgraduate degrees across its specialist subject areas of animal, agriculture, equine, sport and veterinary nursing.

Teaching and support staff joined students, their families, and friends for two glorious days of celebration at Gloucester Cathedral.

Nick Gazzard was awarded an honorary degree for his remarkable community work and the creation of the Hollie Gazzard Trust, a charity he founded after the murder of his daughter by her former partner. The trust aims to prevent similar tragedies by increasing awareness of domestic abuse and stalking. Recent projects have included helping launch the Black Country Stalking Support Service; delivering Working Without Fear a dedicated programme supporting businesses and organisations.  At Hartpury’s annual WellFest – an event dedicated to student wellbeing - he has helped to deliver important training workshops to raise awareness around healthy relationships, sexual harassment and safeguarding.

Alfred Morris was awarded an honorary degree for his contribution to education and the vital role he played in Hartpury’s journey towards university status. In his former role as Vice-Chancellor of the University of West of England, he worked to develop a strong partnership with Hartpury College as it was established as an Associate Faculty of UWE. He was an early proponent of the decision to commence the successful journey towards university status, achieved in 2018. Alfred has served on the Council for National Academic Awards, the Higher Education Quality Council, the Higher Education Funding Council for Wales, and the Further Education Funding Council for England.

Graham van der Lely was the third honorary degree recipient. As a former governor and Chair, he’s been a driving influence in Hartpury’s journey from an agricultural college with just 50 students to a thriving university and college with over 4,500 students – with qualification staring at A-level and diploma-level and progressing all the way through to master’s degrees and PhDs. His background in both agriculture and equine has helped to ensure Hartpury remains true to its roots as it continues to grow.

Graham has given many hours of his time in supporting Hartpury Principals and Vice-Chancellors, fellow governors and senior staff, helping them to navigate the journey to one of the largest land-based colleges and more recently, a university. His voice as a member of the Association of Colleges’ Council helped to ensure issues facing land-based colleges and the wider land-based industries were heard.

Professor Andy Collop led his first graduation ceremony since taking up the post of Vice-Chancellor, CEO and Principal at Hartpury in September. He paid tribute to the honorary degree recipients and students.

“Graduation ceremonies are the perfect way to come together to recognise and celebrate hard work, dedication, and achievement, and it was a real pleasure to lead the celebrations at my first Hartpury graduation ceremony.

“All three of our honorary degree recipients are examples of individuals who’ve gone above and beyond to help improve the lives of others, and it was a privilege to recognise their individual stories at the most prestigious event in our calendar.

“I also want to pay tribute to the students who graduated last week, many of whom faced the unprecedented challenges of the Covid-19 pandemic during their studies. They showed resilience and determination that will serve them well as they move into the next chapter of their lives. We can’t wait to follow their journeys.”

Graduates from the institution have a strong record of employment too, backed up in results released from Graduate Outcomes 2022, in which 97% of graduates were in employment, further study or other purposeful activity.

It’s been quite the year for Hartpury University, named no.1 in the South West and 6th in the UK for Teaching Quality in The Times and Sunday Times Good University Guide 2023 – also voted number one in the UK by Hartpury students in the Whatuni Student Choice Awards 2022. Similarly in the National Student Survey 2022, Hartpury was named as the number one English Mainstream University in the ‘Teaching on my Course’ category.

Campus developments were mentioned by both Professor Collop and Chair of Governors, Edward Keene, referring to the unveiling of £9.8m Graze restaurant and learning facility and the commencement of works on a brand new £12.75m University Learning Hub, set to launch in the 2023-24 academic year. 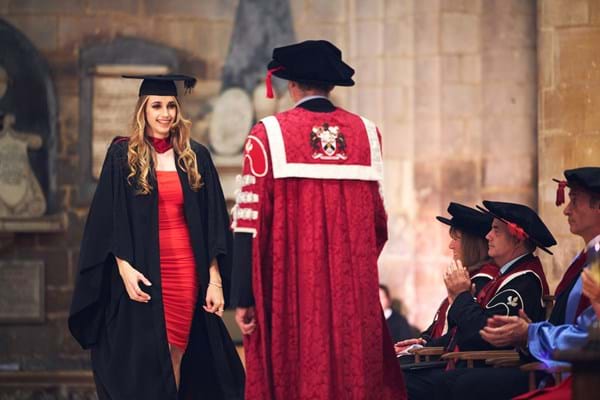