The visitors belied their status as the bottom-ranked team in the last eight and made life very difficult for Premier South A winners Hartpury for significant spells.

But the hosts pulled away with four tries in the second half and will face the might of Loughborough, who defeated Cardiff Metropolitan in their quarter-final, in Gloucestershire in a week’s time.

The home side enjoyed almost all the early pressure and dominated the set-piece, but Northumbria’s resilience and aggression in defence kept Hartpury at bay.

Donald Crawford levelled the scores when he slotted a 35-metre penalty, before missing a shot from out wide for the lead.

Northumbria were gradually working their way into the match and Hartpury looked in trouble when centre George Boulton was sin-binned for a dangerous tackle.

But the hosts grabbed a crucial try right on half-time courtesy of Mike Luxton, who dived over for five points on the left following Seb Rodwell’s rampaging clean break through the middle.

Numbers were even again four minutes after the restart when Northumbria lock Callum McCullough saw yellow and Hartpury made their extra man count immediately as Andy Chesters touched down off a driving maul (pictured, top).

Crawford missed another attempt on goal before Tom Ailes grabbed the hosts’ third try, the flanker dancing over from close-range after Rik Cottrell rose high to steal a Northumbria lineout.

The Geordies were not finished yet, however, and winger Oli Walker showed a neat turn of pace to gather his own chip and race through for his team’s first and only try.

But Ian Clark all but sealed the win 12 minutes from time when he scorched past his opposite number to cap a penetrating Jaike Carter burst (pictured, bottom), with Gareth Thompson converting.

Northumbria then went down to 14 men for the second time as replacement Charlie Popp paid the price for repeated infringements, before Chesters added gloss to the score line with a try from a pushover scrum in the dying minutes.

Hartpury would like to thank Northumbria for an excellent match and wish them well for the rest of the season.

Hartpury’s semi-final is at home to Loughborough on Wednesday 19th March. 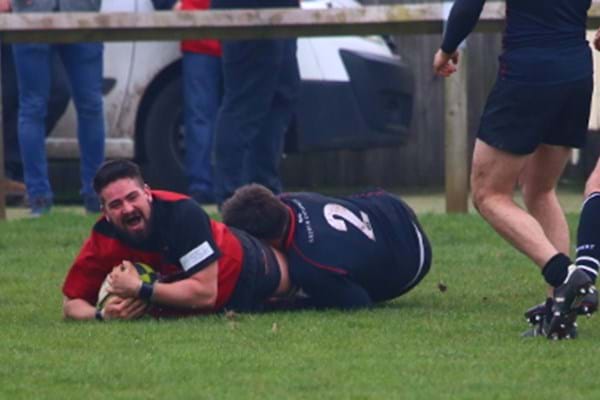