Rugby starlet Ellena Perry is ready to follow the well-trodden path from Hartpury College to international recognition after being called up to the England Women’s Under-20s squad for the first time and starring for Saracens.

The prop and A-level student has already made an impact on the national stage after appearing in the first ever Women’s Premiership final recently at the age of only 18.

Ellena, from Hertfordshire, played in the final showpiece that was held at The Stoop as Saracens came up against a strong Richmond team that had been beaten only once all season, eventually losing out 28-17.

She had only been playing for Saracens for seven weeks, having become eligible to play once she turned 18 in early December.

She said: “Despite the result, it was a great experience to play in a final and in a stadium filled with fans. It’s certainly fired up my motivation.

“Saracens are my local club and I joined them from Welling soon after my birthday. It was great to be able to break into the first team and help the squad in the last few games of the season.”

Ellena, who joined the college in 2014, will be hoping to emulate the rise through the rugby ranks experienced by former students, Sydney Gregson, Megan Jones and Abbie Brown, who went on to represent England at senior level after joining the much-vaunted AASE (Advanced Apprenticeship in Sporting Excellence) Women’s Rugby programme at Hartpury.

She said: “I’ve had a strong season so far and getting called up to the England squad was a really proud moment for me. I know that I need to keep working hard though and continue to develop to make sure that all these experiences I’ve had so far build towards improving me as a player.

“Rugby is my passion at the moment but I also know how important my studies are. “Thankfully at Hartpury, there’s a really good balance between the two and that has been a massive help.”

Ellena will be meeting up with the rest of the England Under-20s squad this weekend, which will include Sydney and 12 other players with a connection to Hartpury – as current or former students - as they prepare for a double-header with France while also taking on an Army XV side.

She said: “It’s good that there are a lot of girls from Hartpury involved in the squad because it will definitely help us all settle in as we already know each other.

“Hopefully, we can produce some strong performances. Personally, I’m going to keep working hard and try to cement my place in the squad, and in the long-term, I want to kick on and break into the senior set-up.”

LJ Adams, Hartpury’s women’s rugby programme manager, said: “Ellena is a very focused and driven individual who is constantly developing, both physically and her core rugby skills. This is now beginning to reflect in her recent successes and I hope she continues to build on this as she begins her international career.” 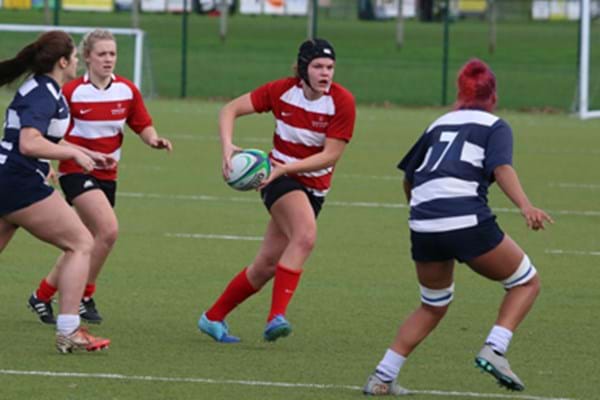