The Hartpury Netball Academy is celebrating more success after 16 of its current and former players were selected by Superleague franchises Team Bath and Severn Stars.

Their selection highlights the continuing success of the partnership between Hartpury, a Team Bath Netball Academy Development Centre, and the five-time Superleague champions.

Katie Pauling, Olivia Selby, Lucy Drury and Emily Brooks, meanwhile, have all been named in Severn Stars’ NPL U19 squad, with another Hartpury student Sydney Palmer named in the training squad.

Emily Lacy, Thalia Letori and Sophie Margetts and former students Martha Scott and Darcie Dunn will play for Severn Stars in the U21 NPL under the guidance of head coach and former Hartpury College student Kellie Hull.

The NPL, which is run by England Netball, is the country’s premier netball league at U17, U19 and U21 level, with many players going to enjoy successful Superleague careers.

Hartpury Netball Academy Manager Holly Duerden said: “We’re absolutely delighted that so many of our former and current college and university students have been named in the Team Bath and Severn Stars U19 and U21 squads.

“It’s a fantastic achievement and all the players should be incredibly proud of themselves. Their success will be great inspiration to other students within the programme and we’ll continue support them as much as we can, on and off the court.

“To the best of my knowledge, no other college in the UK has any many NPL players within its netball programme as Hartpury.”

In the 2019-20 season, Hartpury netball players were Gloucestershire County U-19 champions, South West Netball Regional U19 champions, and runners-up at the England Netball National Schools U19 Championships. 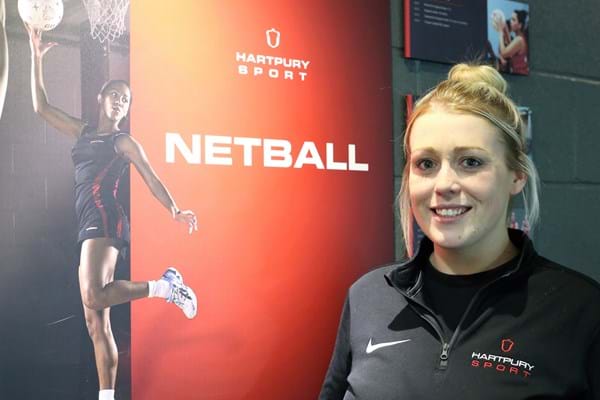