NAF marked their tenth anniversary as title sponsor of the NAF Five Star International Hartpury Horse Trials in style, as the eventing fraternity and spectators returned to the Gloucestershire venue for a bumper weekend of competition. Around 10,000 people also tuned in to watch Saturday’s cross country action live streamed via the Hartpury website.

Near-perfect ground and weather conditions made for a thrilling weekend of jumping action, after two action-packed days of dressage. Eric Winter’s cross country courses presented a fair challenge to each respective level, ensuring that each of the three phases played their part in the final results.

Leaders after dressage, they briefly slipped a few places with a rail down in the showjumping. However, a solid cross country performance and time penalties for her rivals propelled Nicola back to the top spot on Saturday afternoon. Former winner Kitty King and Vendredi Biats finished in second place, a pairing with an impressive record in Hartpury’s 4*. Gemma Tattersall and Chilli Knight finished in third place and were the only combination to finish inside the time.

Alexander Bragg and King Of The Mill put in their customary reliable round of jumping at Hartpury, adding just 1.2 time penalties to their dressage score of 30.8 and finishing in fourth place.

Pippa Funnell enjoyed a super week, with all three of her rides finishing in the top ten (5th, 6th and 7th). The reigning Burghley champion put on an impressive display, with her horses never dropping from the top ten in any of the three phases. Her mount Majas Hope stepped up markedly in the dressage phase, following help from Tokyo team bronze medal winning dressage rider and Hartpury Equine Academy trainer Carl Hester. William Fox-Pitt’s record of the lowest ever finishing score at Hartpury’s 4* (25.5 with Bay My Hero in 2015) remains intact, but a quick round across the country this time around still helped him move up the places into ninth place.

The class was a who’s who of eventing, made up of Olympians, World and European champions. It also offered British selectors a crucial opportunity to mull over their squad selections for the FEI European Eventing Championships in Avenches next month. Selectors are expected to announce their choices by the end of August.

Gubby Leech and Royal Harvest won the NAF Five Star Superflex CCI3*-L on Sunday afternoon thanks to an immaculate round of jumping and the quickest cross country round in the field. The gelding, by Royal Concorde, finished on a dressage score of 31.3.

Lucy Robinson and Cosmic Charm added just 1.2 time penalties to her dressage score of 31.7 and finished in second place, while Sasha Hargreaves finished in third with a score of 33.9.

Piggy March and Cooley Lancer, leaders after dressage, slipped down the order on Saturday after picking up 20 penalties at the influential set of corners at the NAF Magic Pool. Italy’s Giovanni Ugolotti was well placed after cross country, adding just 3.2 time penalties to his dressage score of 25.8. However, two frustrating rails in the showjumping phase meant he had to settle for sixth place. 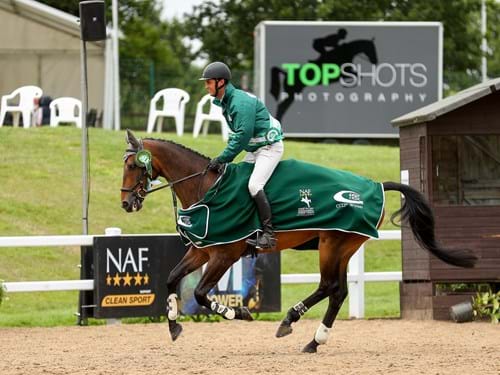 Ibble Watson and Candito made the final jumping phase count on Sunday with a perfect clear round ensuring she claimed victory in the NAF Five Star M Power CCI2*-L. Australia’s Sammi Birch and Jutopia led after the dressage and cross country phases, although two rails proved expensive in the Hartpury International Arena, slipping the combination down to 13th place.

Imogen Murray and MDSandyhill Zorro finished in second place, just 0.1 pens behind the winner. The pair added nothing to their dressage score of 27.8 and were impressive in both jumping phases.

Penalties in the showjumping proved to be particularly costly in the 2* competition, with the top ten all jumping clear. An oxer set over a water tray proved particularly tricky early in the day, with the front rail frequently hitting the surface of the International Arena. 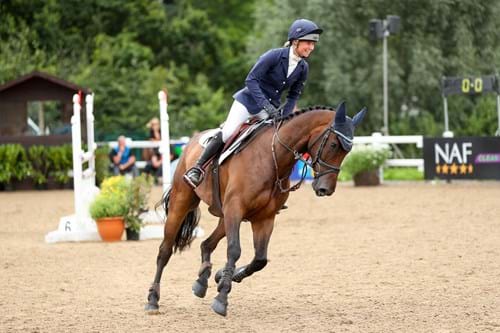 “We are so very grateful to NAF for their ongoing sponsorship and support of our international event,” said Event Director, Phillip Cheetham.

“NAF’s support over the past decade has helped us to grow and nurture the event into what it is today. We feel incredibly fortunate to have the support of a brand so widely regarded for its supplements and horse care expertise, as well as a shared commitment to clean sport.

“Thank you to all the riders, horses, owners, supporting sponsors and spectators who have helped us celebrate a return to eventing at Hartpury in 2021. Each has played a pivotal role in making this week’s event a success. Congratulations must go to Nicola Wilson, Ibble Watson and Gubby Leech in particular on their stellar performances. We can’t wait to welcome the eventing community back in 2022” he added.

Hartpury University and Hartpury College will host the FEI European Championships for Young Riders and Juniors, for both dressage and eventing, in 2022.

A number of competitors took part in the NAF Five Star International Hartpury Horse Trials while many more helped behind the scenes, covering a number of event management support roles. If you're keen to be part of a world-class equine environment like this, apply for 2021 through Clearing. You don't have to ride to study at Hartpury, and there are a number of roles in equine event management and other sectors. Click here to learn more.