Hartpury secured the BUCS Women’s National League Championship title for the first time on Wednesday afternoon, beating the University of Edinburgh 36-22 at Sixways Stadium. Both Hartpury and Edinburgh had previously made the final in 2019/20 only for the season to be cut short due to the pandemic.

Natasha “Mo” Hunt’s team lifted the trophy in front of a sizeable crowd after what turned into a memorable 80 minutes. Hartpury was pushed all the way by an Edinburgh team brimming with international talent, fresh from Scotland’s TikTok Women’s Six Nations camp.

During the first half, nothing separated the two teams until Scottish international Meryl Smith dotted down from a crash ball within five metres, just seconds after Hartpury’s Jordan Russell stifled the centre who looked certain to score. Russell was later awarded the Player of the Match award, and with good reason.

Despite Edinburgh’s dominance, Hartpury stood strong against incursion after incursion into their 22m, until Lowri Davies gave Mo Hunt’s team the lead for the first time only to find the scores back level going into the break.

The second half began much like the first, with Edinburgh taking the lead. However, Hartpury’s hooker Amy Dale soon scored a hat-trick of tries, the final try leaving the game beyond all doubt as fans of the team in red started their celebrations moments before the final whistle.

Speaking after the game, Mo Hunt, Head Coach of the Hartpury BUCS Women’s Rugby team said: “Lynnie (Sean Lynn, Hartpury’s Head of Women’s Rugby) always talks about being warriors, and that’s what we were today.

“It’s knockout rugby at the end of the day, you’ve got to want it: everyone wanted it on the pitch. Full credit to Edinburgh, too. I thought they were outstanding today. What a spectacle for women’s rugby. You never want to be on that side of the result, so my heart goes out to them, but from the Hartpury perspective I’m so proud.”

Mo herself recently returned to international duties, playing for England in the TikTok Women’s Six Nations.

Hartpury’s well-established women’s rugby academies continue to provide a vital pathway for students to combine sporting passions with their studies and gain a university-level qualification. Access to leading facilities (including an anti-gravity treadmill, altitude chamber, high-tech 3D tracking cameras and high-resolution digital mirrors), world-class coaches and other support services is a proven pathway to elite sport as well as careers in coaching, nutrition and management. Hartpury is home to a total of 10 competitive Sports Academies.

Additionally, Hartpury has ranked in the top 15% of all UK universities for Teaching Quality and top 25% for Student Experience in The Times and Sunday Times Good University Guide. 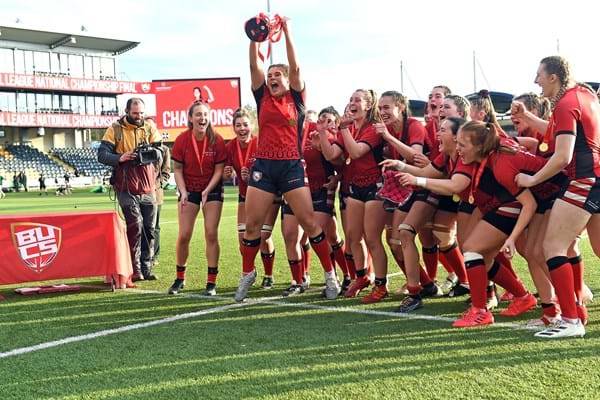