Hartpury University FC are Herefordshire FA County Cup Champions after seeing off Hereford FC with a 2-1 victory on Tuesday 26 April. Hartpury travelled to the Edgar Street stadium for the final after beating Clee Hill United 5-1 in March.

Going into the final, Hereford FC were 91 places higher in the National League pyramid – although this was not the first time Hartpury have resisted higher league opposition.

Hereford FC opened the scoring with Pa Sulay Njie playing a through ball in for Ryan McLean who duly found the back of the Hartpury goal despite Stephan Sarkodie’s (BA (Hons) Sports Business Management) best efforts. Hartpury went into half-time 1-0 down but by no means out of the tie. Hartpury began the second half with relentless attacking football and deservedly opened their scoring account from the penalty spot, awarded by referee Josh Brookland when King Baidoo (BSc (Hons) Strength and Conditioning) was brought down by Keenan Patten. Najee Holder (MSc Sports Management) sent the goalkeeper the wrong way to draw Hartpury level. Finally, it was Emmanuel Bam (BA (Hons) Sports Business Management) who fired the ball into the net from close range securing victory for the visitors and completing a fantastic second half comeback to win the title.

Dr Martin Longworth, Head Coach for Hartpury University FC and postgraduate Programme Manager (MSc Sports Coaching) at Hartpury University, said: “I’m absolutely thrilled for the lads who’ve risen to the challenge and given another great account of themselves when it mattered most. We were under no illusion that this was always going to be a very tough game, and Hereford FC pushed us all the way on their own patch.

“This was an opportunity to demonstrate our quality once more and every player stepped up to the challenge brilliantly, I’m so proud of everyone who has contributed to our season both on and off the field.”

Josh Gowling, Hereford FC Manager, said: “I thought Hartpury were excellent, they worked hard, had good endeavour, and wanted to win the game. I thought we (Hereford) had an excellent first half and could’ve put the game to bed in the first half and then we seemed to blow up in the second half and blew out of steam.”

Victory has meant Longworth’s team have done the Herefordshire League and Herefordshire County Cup double in their first full season in existence (the last season being cut short due to Covid-19).

Hartpury gives talented young athletes the opportunity to develop their sporting potential whilst studying for their degree, through its 10 competitive Sports Academies. Hartpury University FC squad members and their courses are as follows:

Hartpury University currently also has MSc Studentship positions within football: a coaching role, and performance analyst. Each studentship offers its own postgraduate degree options that include MSc Sports Coaching, MSc Strength and Conditioning, MSc Applied Performance Analysis in Sport, or MSc Sports Management. In addition, the studentships provide a valuable opportunity to network with professional and semi-professional clubs, players and coaches both nationally and internationally, making lifelong connections.

Additionally, Hartpury has ranked in the top 15% of all UK universities for Teaching Quality and top 25% for Student Experience in The Times and Sunday Times Good University Guide.

As recently as this week, Hartpury has been shortlisted in five Whatuni Student Choice Awards including the converted University of the Year category, as well as career prospects, support, lecturers and teaching quality, and facilities. 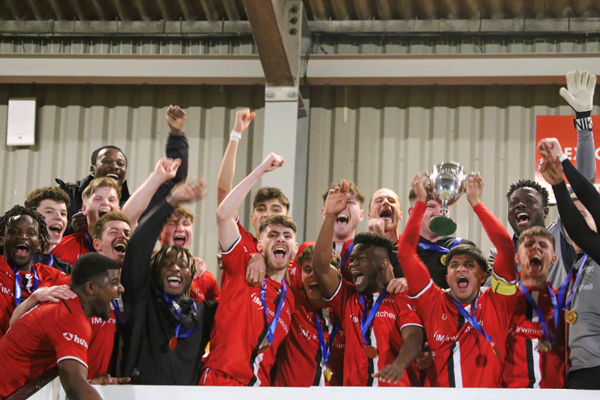