A Hartpury College student and member of Hartpury’s Modern Pentathlon Academy has been granted a Sport England ‘Backing the Best Award’. The award is in recognition of her sporting talent and potential, announced as she joins the programme at ‘Team England Futures’ - run in conjunction with the Birmingham 2022 Commonwealth Games.

Launched in 2016, Backing the Best is supported by £5.5 million of National Lottery funding which aims to level the playing field among England’s brightest sporting prospects. The scheme has already produced world, European and national age-group level champions. The funding is available to governing bodies of various sports to enable them to be more proactive in widening the demographic profile among athletes on the talent pathway, in time leading to high-performance success for a more diverse group.

Jessica trains at the modern pentathlon academy alongside her studies, thanks to the dual career pathway whereby students are supported to train and compete in their chosen sport alongside completing an academic qualification. A first year BTEC Level 3 National Extended Diploma Sports and Exercise Science student, she is also studying the Modern Pentathlon DiSE programme alongside training sessions with the Pentathlon GB Talent Squad.

Jessica will await to hear whether she’s been selected for the World Championships and European Tetrathlon U19 Girls team with Pentathlon GB.

“I’d like to say a huge thank you to my coaches Robert Flack and John Rees,” said Jessica.

“Without those two putting in the many hours of training and fencing lessons we do at Hartpury; I wouldn’t be at the top of my game. There’s still lots of work to put in ahead of the championships in April and I’m focused on being at my best to take advantage of this incredible opportunity and to build on this spring’s many achievements.”

Hartpury is home to one of Pentathlon GB’s leading modern pentathlon academies, run under the watchful eye of Pentathlon GB Pathway Coach Robert Flack. Students have access to a range of world-class facilities in our £10 million Sports Academy development, including an anti-gravity treadmill, high-tech 3D tracking cameras and £250,000 performance gym.

Modern pentathletes benefit from an outdoor laser run range and expert guidance in areas such as sport science, strength and conditioning, and sport psychology help athletes to compete and win at the highest university, college and national junior levels as well as frequently receiving international honours. 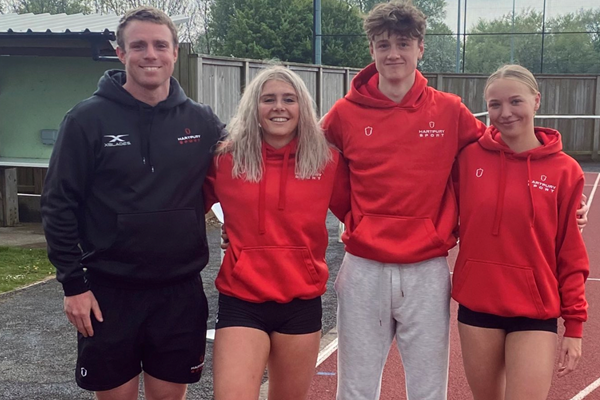