Anya and her horse “K” (or Kash as he’s known at home) stormed around Capt. Mark Phillips imposing track, making light work of the many maximum-width obstacles and an influential water complex that caught out several leading combinations. They finished on their dressage score of 29.6.

Anya said: “Kash and I have had back-to-back wins in the Open Intermediate under 21 at the Spring Carnival at Thoresby Park International and Kelsall Hill International. He finished on his dressage score of 27.5 at Thoresby being his first intermediate run, and then finished on his dressage score of 29.6 at Kelsall Hill. These were great results given that these were his first two runs at this level over challenging international tracks.

“As part of the Hartpury Equine Academy, I’ve taken advantage of the brilliant training available from both Lizzel Winter, Nick Burton and Carl Hester, which has helped with my preparation and confidence as well as improving my overall performance.”

Anya is also a Diploma in Sporting Excellence (DiSE) student. The DiSE programme at Hartpury, is an additional Level 3 qualification designed for athletes across a range of sports who have the potential to perform at the highest level.

Hartpury graduates have also been making their presence felt on the eventing circuit with Laura Gibson finishing in 2nd place at Badminton Horse Trial’s prestigious Grassroots Championship earlier in May. Laura completed an FdSc Equine Performance before progressing onto the BSc (Hons) Equine Management top-up. At Badminton, Tara Keoshgerian – a former BSc (Hons) Equestrian Sports Science student, had a tradestand for her company Mochara (equestrian activewear and fashion). Tara recently came back to Hartpury’s Rider Performance Centre to work with Jenni Douglas and Celeste Wilkins on a performance analysis project for her business.

Earlier this month, dressage rider Jess Hickey scored a double of wins at Prestige Equestrian Centre in the Elementary 53Q and Medium 61 classes with scores of 68.9% and 68.5% respectively. Her chestnut mare ‘Bespoke’ continues to strengthen and improve with strong results including a win in the Medium 69 (68.7%) class and second place in the Elementary 55 class (69.3%) at Hartpury on 21 May.

Jess’ international partner Ziezo I has enjoyed a successful spring campaign, competing at the Young Rider level at Keysoe International in late March, where they recorded three top-ten finishes.

Emily Dove also had a successful day at Hartpury's April BD show, with a win in Ratibida’s first attempt at Medium 69 (71.5%). The pair also scored 67.2% in Hartpury’s Medium 75 and finished in second place. Since February, Emily has been placed either first or second at every national competition with her horses Ratibida and Galloway Girl.

Lizzel Winter, a Fellow of the BHS and Hartpury’s Equine Academy Director and Coach,  said: “I’m delighted to see such impressive results from our Hartpury Equine Academy members who each work tirelessly and deserve every success. These results are coming thick and fast from often very competitive classes, so are testament to the coaching system we’ve established and the hard work and commitment of the whole team.

“Surrounding our riders with a good support system, combined with clear goals and targets, allows us to focus on those smaller steps that form part of the bigger picture. That’s what we do at Hartpury with our Equine Academy – we leave no stone unturned.

“Our students are immediately surrounded with an experienced, supportive team and benefit from the incredible facilities and equipment that no doubt contributes to the overall success. The Equine Academy offers a unique opportunity for students to access world-class tuition and support, and applications are currently open for the 2022/23 academic year.”

Hartpury’s Equine Academy – one of 10 competitive sports academies – has a proven reputation for nurturing talented young riders to be the best they can be, both in their competition career and academically.

Applications to join the Equine Academy at Hartpury close on 30 June 2022. Learn more about the Academy or contact Lizzel Winter to discuss. 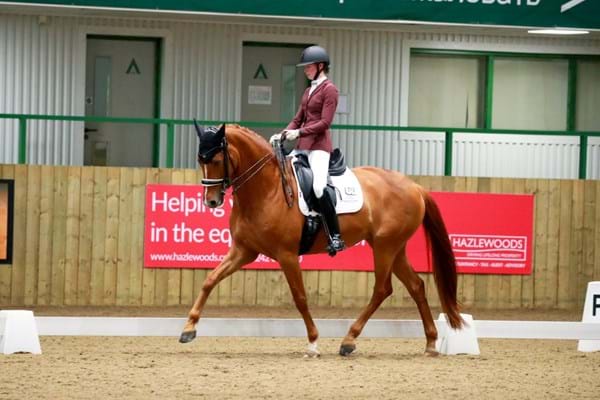