Gloucester Rugby has extended its commitment to Gloucester-Hartpury by significantly increasing funding to the women’s team by nearly 500% from the 2022/23 season.

The Gloucester Rugby Board has approved a proposal to increase the club’s central investment to the women’s team by just under 500%, equalling the enhanced contribution from Hartpury University. Additional revenue will also be generated as a result of joint commercial rights to both the men and women’s teams with existing and new partners, including kit sponsorship. From the 2022/23 season, both Gloucester men and women will wear the same strip, representing the Cherry & Whites teams under one unified club.

Funding for the Allianz Premier 15s side constitutes of investment from the Rugby Football Union (RFU), Gloucester Rugby and Hartpury University.

Gloucester-Hartpury will continue to train and play at the Hartpury campus, which has proved a crucial platform to attract, develop and retain players into the women’s game through the University and College. As with the current season, Gloucester Rugby will also continue to host a number of Allianz Premier 15s fixtures at Kingsholm.

Red Roses Emma Sing and Connie Powell have both graduated through the Hartpury pathway and have since made their debuts this season for England; Connie in November vs USA and Emma against Scotland in this year’s TikTok Six Nations.

Gloucester-Hartpury boast World Rugby Player of the Year Zoe Aldcroft amongst their ranks, while England stalwart Natasha ‘Mo’ Hunt captains the Premier 15s side. Both Aldcroft and Hunt came through the Hartpury pathway programme.

Commenting on the announcement, Gloucester Rugby CEO Lance Bradley said: “Women’s rugby is going from strength to strength, as is evident by the increasing profile of the game – clearly seen in this year’s TikTok Six Nations, including a record crowd at Kingsholm.

“As a club we want to be at the forefront of that. Hartpury has proved a crucial partnership for us in developing a professional environment for a competitive Allianz Premier 15s club, and we’re proud to be deepening our commitment to the Women’s game with them. Commercially, it represents a significant opportunity to engage with known and new audiences as well as a diverse range of brands, ultimately with the goal of growing the game for the longevity of our sport.

“There’s more work to be done but with further financial investment from the club, a commitment from our current and future partners, and an absolute desire to promote and support the Gloucester-Hartpury Women’s team, we’re confident we can play a role in the continued rise of women’s rugby.”

“This is an exciting time for women's rugby, and we all want to see the team competing at the top of the women's game in England. This partnership is now strong enough to compete with the best in the league.” 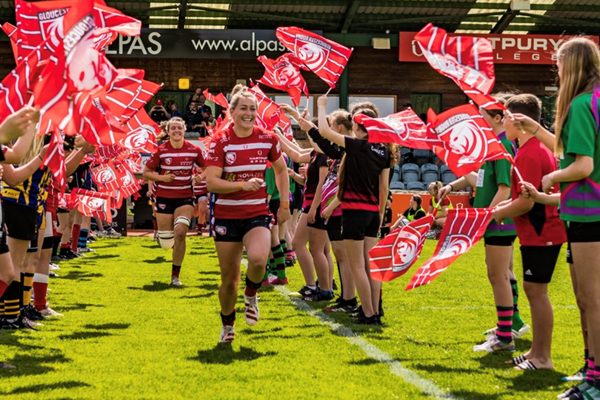