Four Hartpury alumni have been named by England Head Coach Eddie Jones, as he confirmed who’d get a seat on the plane ahead of the squad’s first tour of Australia since 2016.

Former students Harry Randall, Ellis Genge, Jonny Hill and Jonny May have all been named in the squad, players who came through Hartpury’s dual career pathway that allows students to benefit from Sports Academy training while studying for a diploma or degree.

Harry Randall (a former Level 3 Extended Diploma Sport (Performance and Excellence) student) who also made his first Six Nations start earlier this year, previously played for England at Under-20 level. During his time at Hartpury, he won both Advanced Apprenticeship in Sporting Excellence (AASE) and British Universities and Colleges Sport (BUCS) Super Rugby winners’ medals.

Ellis Genge (a former Sports Science Diploma student) was captain of Hartpury College before joining Bristol in 2013 at the age of 18. He helped lead the Hartpury team to victory in the AASE league before representing England at youth level from U17 to U20. He made his international debut for England in 2016.

Jonny Hill, (a former Level 3 Extended Diploma Sport (Performance and Excellence) student) who turned up to a walk-up trial at Hartpury as a 17-year-old, went on to play for two seasons with Hartpury College having two runouts for Gloucester in the LV= Cup.

He has helped the Exeter Chiefs to double success in the 2019/20 season before impressing Eddie Jones on his England debut.

BA (Hons) Sports Business Management graduate Jonny May, made his international debut on the tour of Argentina in 2013 before being named on the wing for England’s opening Six Nations encounter with France a year later. He originally made his mark with a string of high-profile performances for Hartpury that led to a full-time position with Gloucester Rugby.

Russell Marchant, Vice-Chancellor, Principal & CEO of Hartpury University and Hartpury College, said: “We’re very proud of our Hartpury old boys and all that they’ve already achieved. To represent your country is a great honour and these individuals have done so on more than one occasion – an outstanding achievement. These players are championing the work of our teaching and coaching staff, the investment we’ve made in our facilities and the overall passion we have for rugby at Hartpury. They are incredible ambassadors and role models for those aspiring to follow in their footsteps.”

Talking to ruck.co.uk, Eddie Jones said: “This squad is a real mix of young, talented players and some very experienced, senior players and we’re looking forward to bring the group together.

“This tour will be a great experience for the group and a crucial part of the team’s work towards the Rugby World Cup in 2023. We will continue to develop the base of the squad and how we want to play.

“We’ve put a lot of work into preparation for the tour over the past few weeks but now the hard work really begins when we finally get the squad on the plane and to Australia.”

More than 200 Hartpury alumni have played international rugby or signed professional contracts around the world. The rugby pathway at Hartpury – a RFU University Partner – means that alongside their studies, students can play for Hartpury College, then Hartpury University and its Championship club Hartpury University RFC.

According to a study by NextGenXV, Hartpury’s setup, has one of the world’s best track records for developing Under-20 international rugby players, several of whom have reached the top of the game.

Picture: Harry Randall during his time at Hartpury 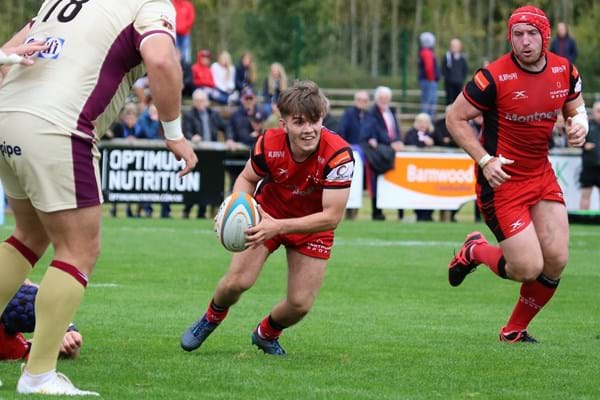