Hartpury University RFC has announced exciting new signings ahead of the 2022/23 season. They include experienced championship and international players as well as several former and current students.

Former Hartpury College and University student Ben Fry (loosehead prop) has signed from Dragons following a two-year spell. He’s a former ACE winner and is no stranger to the Gloucestershire institution. Alex Gibson (tighthead prop) or ‘Bert’ as he’s affectionately known, also returns after two seasons away. The former double BUCS winner is an accomplished tighthead prop at championship level.

Joe Howard (backrow) arrived at Hartpury from Malaysia at the tender age of just 16 and signs from Gloucester where he has been in their Academy since starting his HE studies. A natural leader as well as an ACE winning captain and BUCS Super Rugby, it’s a welcome return in the eyes of many.

Winger Matt McNab signs from Hartpury’s own BUCS Super Rugby squad and has already made several appearances for the RFC alongside his studies. A Zimbabwe international, he brings a physical side to the back three as he steps up to the RFC squad following the conclusion of his studies.

Sam Lewis (back row) has made 21 appearances for the Leicester Tigers Academy between 2017 and 2021 and made 8 appearances for England U20s in 2018. Following loan spells in the championship with Nottingham and Coventry, he made a permanent switch to Italian outfit Calvisano. He’s enrolled on Hartpury’s Level 3 Extended Diploma Countryside Management and will play alongside.

Matt Ward (winger) is a player with experience in England U18s and U20s. A graduate from the Gosforth ACE side and Newcastle Falcons Academy, he enrols at Hartpury as a postgraduate student on the BSc (Hons) Sport and Exercise Sciences.

Sam Rodman (tighthead prop) will bring hugely valuable experience as a championship prop having played at Ealing, Jersey and latterly Cornish Pirates. In total, Rodman has made 41 appearances and the former Leeds Beckett BUCS winning player is an effective set piece performer who will bring valued championship knowledge for the younger squad members.

Former Bristol and Harlequins player Ben Glynn (second row) joins some of his former Bristol teammates in Jack Tovey and scrum coach Wayne Thompson. Now working in Bristol, he’ll continue with Hartpury University RFC as a part-time player. His experience as a premiership player will add further strength and depth to the team.

Jack Davies (second row/back row) is a former Cardiff Blues Academy player and has played his rugby at Doncaster Knights for the past two seasons. He has performed well in the BUCS Super Rugby in 2018/19 including matches against Hartpury! His flexibility to play in the second row or back row will add further benefit.

Wales 7s international Arthur Lennon (fullback/winger) joins after a year on the IRB World Series 7s circuit. A utility back with the ability of playing in several positions making him a great asset in the squad.

Finally, Bradley Dent (winger) was a standout performer for Cardiff Met last season in a successful BUCS Super Rugby campaign. As a strong ball carrier and excellent finisher, he’ll add power and pace to the backline for 2022/23.

Notable leavers include James Williams who joins Bristol Bears after an outstanding season for Hartpury. He ends the season as top points scorer in the league, a testament to his all-round game. Robbie Smith will join Doncaster Knights for the opportunity of a full-time rugby position although has earned his place as a true Hartpury legend, having been a double ACE winner and double BUCS winner. Former BUCS captain Will Crane joins Cornish Pirates after six years at Hartpury and George Simpson heads to Doncaster Knights after three seasons with Hartpury. Other leavers include Shaun Knight (to Cinderford RFC), Conor Maguire (Richmond Rugby), Aled Ward, Olly Robinson (Rosslyn Park), Xavier Hastings, and Oscar Lennon (Bristol Bears).

John Barnes, Director of Rugby at Hartpury University and Hartpury College, said “We’re delighted to announce such a superb line-up of talent in our new signings for the 2022/23 season. It’s great to see many familiar faces pulling on a red and black shirt once again and a number of current students who will benefit from our dual pathway that allows students to play alongside their studies.

“We’d like to wish all the departing players the best of luck in their ongoing rugby journey away from Hartpury. Each and every individual has contributed to the most successful season for Hartpury University RFC Championship with our 7th place finish and they’ll all remain an important part of our journey.” 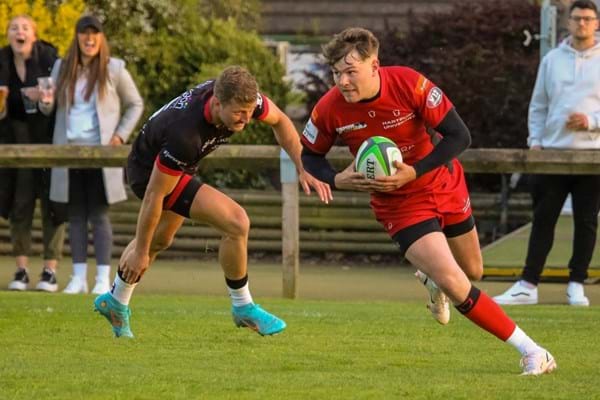