Hartpury University, Hartpury College and Gloucester-Hartpury Women’s RFC are celebrating a year of success stories at all levels of women’s rugby. Multiple team call-ups, media opportunities and outstanding results have all demonstrated the institution’s commitment to providing a sound pathway for those wanting to pursue sporting passions with academic studies.

Former student Zoe Aldcroft, crowned Women’s Player of the Year at the World Rugby Awards 2021, led England to an impressive win against the United States last month. This was Aldcroft’s first time captaining the Red Roses. The 15-try victory rounds off a victorious autumn campaign that has seen a host of current and former Hartpury students play key roles. Connie Powell gained her first cap for England and scored on debut in a match that ended 89-0.

Aldcroft began her Hartpury experience by studying a Level 3 Extended Diploma Sport (Rugby),moving on to study the BSc Sport and Exercise Sciences degree before eventually becoming a Hartpury coach. Alongside her studies, Aldcroft developed her rugby career through the Hartpury women’s rugby academy. The 24-year-old has featured in every Gloucester-Hartpury game in this season’s Allianz Premier 15s competition and scored a try in their recent win over Sale Sharks Women.

Aldcroft’s down-to-earth personality shone through in a recent BBC interview where she unveiled the role of her knitted Jonny Wilkinson in her matchday routine.

Amy Cokayne, Ella Wyrwas and current student Emma Sing have also featured as part of the imposing Red Roses throughout the autumn campaign.

Earlier in the autumn, Natasha “Mo” Hunt, captain of Gloucester-Hartpury Women’s RFC and Senior Women’s Rugby Academy Manager at Hartpury University, became one of the first named players (as well as being confirmed as captain) in the Barbarian’s squad for the clash against Springbok Women’s XV. Rochelle “Rocky” Clark, Anna Caplice and Katy Daley-McLean were also named in the squad. The game, that ended in a victory for the Barbarians (60-5) was played in front of a record crowd for a women’s fixture with an attendance of 29,500.

Hunt used her extensive experience from international 7s and 15s as well as two Rugby World Cups, four Six Nations, two Olympic Games and the World 7s Series to commentate for the BBC where she covered all autumn international fixtures.

During the summer, Hartpury alumni made up an incredible 6 of the 7 selected team members for GB’s Women’s Sevens squad at the Tokyo 2020 Olympics. Natasha Hunt, Abbie Brown, Holly Aitchison, Megan Jones, Abi Burton and Alex Matthews were members of a 12-strong squad that headed to Japan, each notably playing a role in a 21-12 victory over the United States in the quarter-final match.

More recently, Gloucester-Hartpury’s Kelly Smith and Alicia Maude were named in the GB Sevens squad for the Dubai 7s (26/27 November).

First year students Tess White, Gwennan Hopkins, Sophie McQueen, Maisie Johns will join second year students Lucia Scott, Olivia Constable, Naomi Brennan, Cerhys Gould, Incila Ocal, Kira Leat and Leah Brough have all been selected to progress through to a final selection game where two teams of 23 will face each other in a battle to represent England in the new year.

Hartpury’s well-established women’s rugby academies continue to provide a vital pathway for students to combine sporting passions with their studies and gain a university-level qualification. Access to leading facilities (including an anti-gravity treadmill, altitude chamber, high-tech 3D tracking cameras and high-resolution digital mirrors), world-class coaches and other support services is a proven pathway to elite sport as well as careers in coaching, nutrition and management. Hartpury is home to a total of 10 competitive Sports Academies.

Hartpury’s women’s rugby academy received a boost earlier in the year when Vitruvius, Novazera, Lodders, Cityheart and Renouf Wealth Management signed up for a range of sponsorship opportunities offered through the Kick Start Campaign.

“We’re absolutely delighted with the performances at every level of women’s rugby during the past twelve months,” says Tom Radcliffe, Director of Elite Sport at Hartpury.

“We’ve worked hard to refine a pathway for students at Hartpury that enables them to take advantage of unprecedented opportunities to compete and coach.

“Our close-working relationship with Gloucester-Hartpury, commercial partners, academic staff and the local community no doubt play a key role in the success of our students and alumni. Thanks to the work of all involved, Hartpury remains a beacon of sporting success for women’s rugby, and we are looking forward to 2022.

“The successes of 2021 show that students considering Hartpury University or Hartpury College don’t need to choose between pursuing their sporting ambitions or progressing academically. They can do both.” 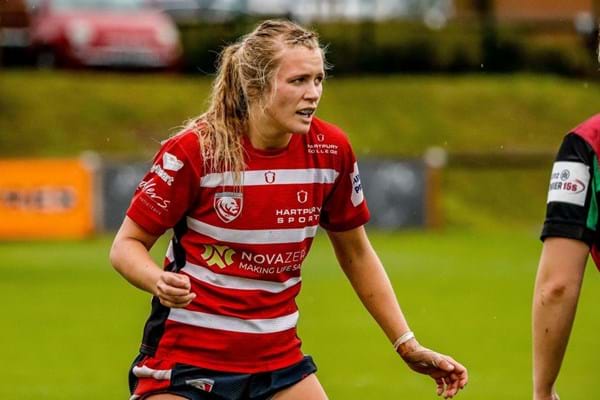