One of the UK's most popular animals, the hedgehog, has seen its numbers drop by a concerning 50% across a decade. This alarming figure has been put down to factors such as loss of habitat, use of chemicals in gardens and on farmland, death through accidents on roads, and other human-related factors.

“One of the biggest causes of hedgehog decline is habitat fragmentation," explains Dr Lucy Bearman-Brown, leading hedgehog conservation expert and Senior Lecturer in Zoology. "As housing estates are built, roads are built and the landscape is broken up into increasingly small chunks. That can make it harder for hedgehogs to find each other for mating and they might struggle to find enough food and nesting sites.”

Hedgehog numbers in Britain have been on the decline, dropping by 50% over the last decade. There are now fewer than one million left in the UK.

The hedgehog was voted as the UK's favourite wild animal with a huge majority of 35.9%, more than double that of the red fox, in a poll run by the Royal Society of Biology.

As hedgehogs spend 85% of their life in their nest in dense undergrowth and long grass, they are in danger whenever land is cleared or long grass is mown.

Lucy theorised that detection dogs could find hedgehogs efficiently before their habitat is cleared in land development projects, allowing them to be moved out of harm’s way.

She teamed up with the People’s Trust for Endangered Species and the British Hedgehog Preservation Society to work with springer spaniel Henry and his trainer, Louise Wilson of Conservation K9 Consultancy.

The eight-month project was carried out across a range of habitats and weather conditions at different times of day. Lucy made use of Hartpury’s facilities and expansive 360-hectare campus throughout. 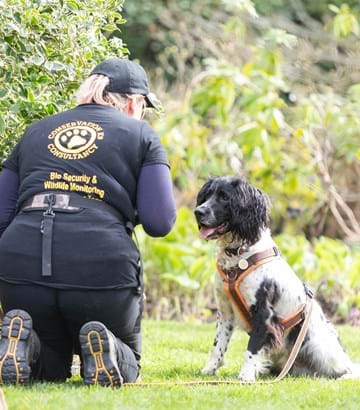 Lucy initially established the effectiveness of ‘traditional’ hedgehog detection methods such as spotlights, before Henry was sent in to search the area. Lucy then searched again using thermal cameras to see if modern technology could also help with detection rates.

After his training, Henry was able to detect significantly more hedgehogs than were found by spotlight, and didn’t miss a single animal that was also detected by thermal cameras. He was able to cover large areas in a short time, finding hedgehogs at a distance and in unlikely places.

“Henry is trained to locate hedgehogs without stressing or hurting them," confirms Lucy. "They burrow in the oddest places, and are especially hard to find during the day or while hibernating, but Henry never misses a beat.

One time he signalled the presence of a hedgehog in the middle of a field. I thought he must be wrong, but there was a hedgehog hunkered down in the grass!" 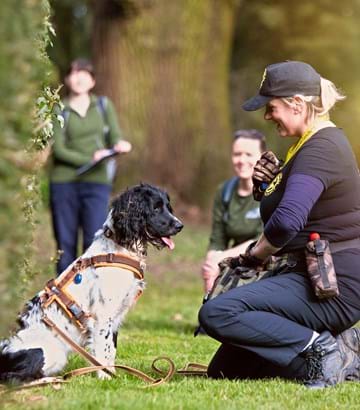 Though Henry is currently the only dog in the UK trained specifically to find hedgehogs, the success of Lucy's research has opened up exciting possibilities for the use of detection dogs in conservation, drawing interest from development projects across the UK. She hopes that through the combined efforts of researchers, the public and organisations, the decline in hedgehog numbers can be halted.

Henry can help us undertake more reliable counts of hedgehogs, whilst also providing a way of protecting hedgehogs in the wild. The plan is that more dogs can be trained so we can better understand how hedgehogs use the landscape, and work towards protecting the most important areas.”

Lucy has subsequently shared her research nationally and internationally, and was interviewed live on the BBC’s popular programme, The One Show.

Henry has also received recognition, winning the Worker category at the inaugural Naturo SuperDog Awards, which celebrates and recognises the UK’s exceptional dogs.

Working together to improve the lives of animals

MRes Animal Behaviour and Welfare student Becky Favier undertook her project in tandem with Lucy's work. Our lecturers often involve students in their research, acting as mentors and co-researchers.

"It’s been the most incredible experience. Being able to contribute to the bigger picture through science is why I left my job for a master’s degree. Working with a domestic animal to protect a wild one is something I never dreamed I would be doing. It has so much potential to improve hedgehog conservation methods in the future." 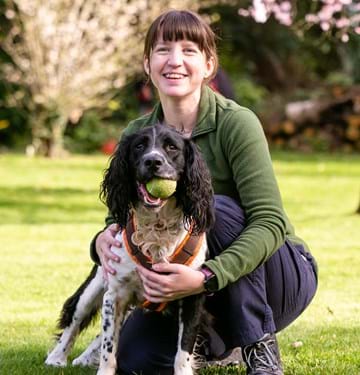 Research is central to life at Hartpury. Every year we support projects across a wide range of subject areas that help drive positive change. Many have gone on to be published and presented at conferences worldwide.

With expertise and experience spanning all areas of agriculture, animal, sport, equine and veterinary nursing, our academics are actively involved in research and knowledge exchange. Studies undertaken here are often embedded in larger scale research projects.

Exploring the varying information, behaviour and values associated with two production systems and their selling routes.

The effects of a rock drumming intervention on children with additional educational needs.

Rider posture and its influence on synchronisation

How Hartpury’s industry-leading facilities have been used to gauge elite technique indicators in dressage riders.