I believe the tools I was given throughout my time at Hartpury played a massive part in enabling me to achieve my ambitions.

I feel extremely lucky to play the sport I love and to have studied with people I now consider friends for life.

After being released as a first-year professional at Cheltenham Town FC, my dreams of being a professional footballer appeared to have been cut short.

While dealing with the setback, Marc Richards (Assistant Director of Elite Sport) reached out to me and introduced me to Hartpury and the courses that were available to study, as well as the full-time football programme, which was a massive attraction to me.

The possibility of continuing to improve as a player and getting a degree under my belt meant that I had always something to fall back on if I couldn’t pursue my career as a professional.

I decided to enrol on the Sport Performance course that fulfilled my interest in everything performance-related within sport. The course allowed me to have a better understanding of different details and elements of performance that I then could apply to my own game.

Alongside this, the course allowed me to explore future possible career paths, such as coaching. Placement was a great way to get first-hand experience in doing this.

In terms of an effective learning environment, I believe Hartpury is unrivalled. The facilities and support that’s available at Hartpury are more exceptional than professional environments that I have been a part of.

I was lucky enough to work with top coaches such as Matt Taylor (current Exeter City manager) and Marc Richards who have helped develop me as a player. I was able to develop physically through strength and conditioning sessions that aided my game massively and helped me perform not only better but consistently.

It was also important to balance academic and my sport commitments, especially as I was playing externally for Gloucester City AFC part-time alongside my degree. This was made easier by classroom sessions where we would focus on scheduling and making sure we got the right recovery in to be able to perform and learn at our best.

I felt that no stone was left unturned when it came to the support available to me as a student athlete.

After graduating, I signed for Kidderminster Harriers where I had two successful seasons in National League North.

In August 2020, I signed a two-deal at Doncaster Rovers where I made my return to the Football League, six years after being released as a 19-year-old.

I believe the tools I was given throughout my time at Hartpury played a massive part in enabling me to achieve my ambitions. I feel extremely lucky to play the sport I love and to have studied with people I now consider friends for life.

I will always be grateful to Hartpury and I owe a lot to the Hartpury family. 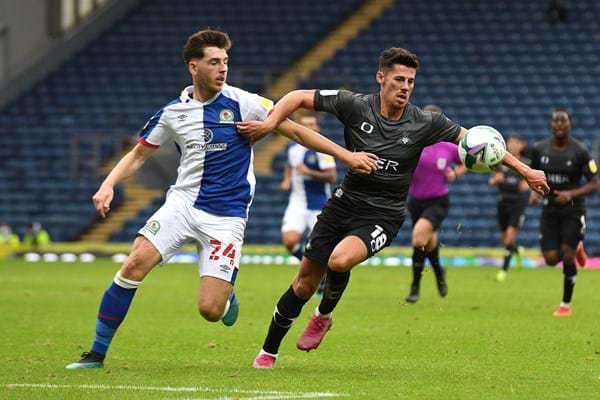