Zoe Aldcroft, a former student of both Hartpury University and Hartpury College, has been named World Rugby’s women’s player of the year.

The prestigious honour follows an impressive 2021 Autumn Women’s Internationals Series in which she captained the Red Roses for the first time. Aldcroft is the fourth England player to win the award, following in the footsteps of Michaela Staniford (2012), Sarah Hunter (2016) and Emily Scarratt (2019).

“I’m so proud,” she said, speaking to the BBC. “I’m very honoured to accept the award. Any individual awards reflect a team effort and I’d like to dedicate this to all of the team-mates, coaching and management staff that I work with for club and country.”

She also added her advice for the next generation of female players was: “Be yourself, work hard and keep your feet on the ground.

In an interview with World Rugby, Aldcroft said she was “lost for words” and paid tribute to her family for helping to get her to the top.

Aldcroft began her Hartpury experience by studying a Level 3 Extended Diploma Sport (Rugby),  moving on to study the BSc Sport and Exercise Sciences degree before eventually also becoming a Hartpury coach. Alongside her studies, she developed her rugby career through the Hartpury women’s rugby academy. The 25-year-old has featured in every Gloucester-Hartpury game in this season’s Allianz Premier 15s competition and scored a try in their recent win over Sale Sharks Women.

“We’re very proud of Zoe and the entire Hartpury team are thrilled to hear she has been named World Rugby’s women’s player of the year,” said Tom Radcliffe, Director of Elite Sport at Hartpury.

“She has always shown a tremendous work ethic both on and off the pitch and is the perfect role model for all future female players. She is a great example for future Hartpury students too, showing how they can achieve academically while pursuing their sporting ambitions.”

Aldcroft’s was also recently interviewed by the BBC, where she unveiled the role of her knitted Jonny Wilkinson in her matchday routine. She is one of over 200 international sports stars produced by Hartpury’s prestigious sports academies.

Hartpury Sport is home to top-level coaches, sport and exercise scientists, nutritionists, conditioners and athletes. The institution is also home to outstanding sports facilities used by students in their academic learning and sports training, such as an anti-gravity treadmill, altitude chamber, high-tech 3D tracking cameras and high-resolution digital mirrors.

Hartpury gives talented young athletes the opportunity to develop their sporting potential whilst studying for their degree, through its 10 competitive Sports Academies – which Zoe trained with as part of the women’s rugby academy. 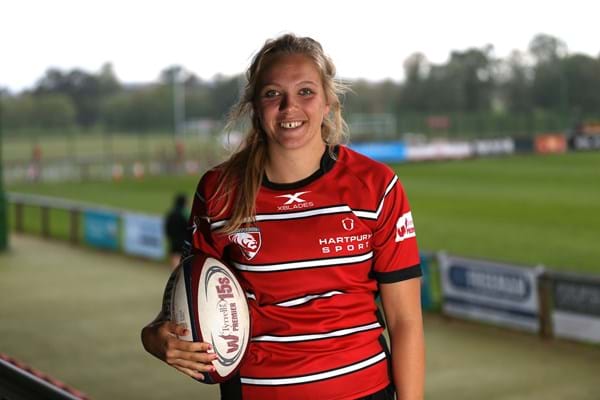